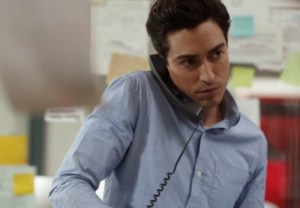 A to Z‘s hopeless romantic Andrew has lots of great qualities, as Zelda points out in TVLine’s exclusive sneak peek from tonight’s episode (NBC, 9:30/8:30c). But does he have what it takes to defend his girl from strangers who call her “a dirty ho”?

“There’s an issue of who wears the pants in the relationship,” star Cristin Milioti tells TVLine. With that in mind, sweet, sensitive Andrew goes about trying to prove his mettle and “that he’s actually a masculine guy… The dynamic is so often the other way, where Zelda is more of a guy.”