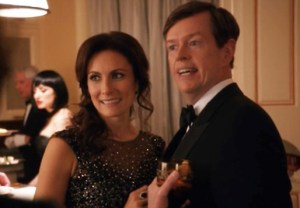 Two of the sharpest thorns in Alicia Florrick’s side are returning to The Good Wife next year.

Dylan Baker will be back as fan-favorite Colin Sweeney in a 2015 episode, while Laura Benanti (Nashville) will also return as Colin’s third wife Renata, Entertainment Weekly is reporting.

Colin will reportedly hire Florrick/Agos/Lockhart/whomever to sue a TV show. Benanti’s Renata, meanwhile, will agree to testify against him in court.

* Adam Brody (The O.C.) has been tapped to star in the new DirecTV drama Billy & Billie, according to The Hollywood Reporter. The 10-episode series follows Billy (Brody) as he falls in love with his stepsister Billie (Boardwalk Empire‘s Lisa Joyce).

* Netflix is developing a live-action series based on Lemony Snicket’s A Series of Unfortunate Events books, our sister site Deadline is reporting. The books, which also inspired a 2004 Jim Carrey movie, follow three young orphans and their wicked tormenter.

* Jeff Fahey (Lost) will recur on the final season of FX’s Justified, The Wrap reports. Fahey will play Zachariah Randolph, a “weathered” man in his 60s.

* About a Boy star Minnie Driver has joined the cast of NBC’s Peter Pan Live! Driver will play adult Wendy, in addition to narrating the musical, which premieres Thursday, Dec. 4, at 8/7c.