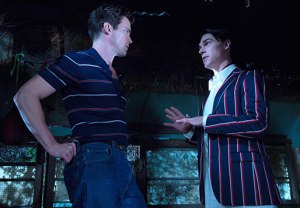 Even after Twisty the Clown and Dora the Maid were offed, death just couldn’t take a holiday from American Horror Story: Freak Show. This week, Gloria reluctantly became an accomplice to murder, and Stanley eagerly served the titular, poisoned “Pink Cupcakes” to the Tattler twins. But did their sweet tooth do them in? And what did Matt Bomer’s killer role turn out to be? Read on and find out!

BITTER SWEETS | Though Maggie reluctantly agreed to help Stanley with his plot to dispatch the freaks and sell their remains to the American Morbidity Museum – for an additional 5 percent of the take – her growing fondness for Jimmy prompted her to warn him (via a palm reading) that a liar was coming to the carnival and he should get while the getting was good. He could do anything he wanted with his life, she said. Except, it turned out, kiss her. Crushed, our poor lobster boy said, “I was an idiot to think I had a chance with a girl like you.”

Meanwhile, Stanley – continuing to pass himself off as Hollywood mogul Richard Spencer – tried to charm Elsa by suggesting that he could make her a TV star. Her response? “I would rather be boiled in oil.” No way in hell would she ever contribute to “the death of art.” However, after that evening’s crowd went from inattentive to appalling — they pelted her with popcorn during “Life on Mars” – she was ready to shrink her ambitions to fit the small screen.

Luckily for Fraulein Mars – even if she didn’t see it that way – by the time she was all dolled up to take publicity photos for her new show, Stanley was driving the Tattlers to a picnic at which he pitched the very same series. For a minute there, we were led to believe that Bette ate one of the con artist’s deadly cupcakes and expired – and then he suffocated Dot! But – whew! – it was just a fake-out. Dot refused the lethal treats for both of them, insisting that they had to watch their figures. Er, figure.

HELP WANTED | When Gloria discovered Dora’s remains, she was, of course, (sorta hilariously) horrified. Even worse, since she was suddenly short a housekeeper, she had to clean up the mess herself. Dandy tried to float the idea that an intruder had slit Dora’s throat, but daft as Mom is, even she didn’t buy it. (Dandy’s punishment? He was sent to his room for the whole day.)

Later, the Motts disposed of Dora in a flowerbed that they had dug extra deep, and Gloria maintained that Dandy’s homicidal tendencies aren’t his fault – his father had them, too. It’s “an affliction of the extremely affluent,” she explained, because to keep their money in the family, many of the mega-rich encourage intermarrying (which results in inbreeding). They’ll figure out some way to deal with his bloodlust, she assumed. But of course, Dandy already had an idea of how to handle it. 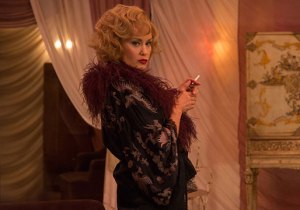 TRUTH OR CONSEQUENCES | When Dell was MIA at showtime, Jimmy went pounding on his trailer’s door and found only a reflective Desiree, who recalled how, even though she was a freak, he “made me proud of who I was.” One thing (she was tipsy) led to another (he cried over Meep), and they started fooling around. But before things got very far, he discovered that she was bleeding, you know, down there. A trip to Ethel’s sweet doctor later, and Desiree knew 1) that she was 100 percent woman (her penis is just an enlarged clitoris), 2) that she had miscarried, and 3) that she could have a baby at all.

While all this was going on, Dell was at the local gay bar, professing his love to a hustler named Andy (Bomer) and promising to leave his wife for him. Desiree didn’t know any of this when he finally came home, but she didn’t need to. She was already itching for a fight. Off what the doctor told her – and Ethel’s revelation that Dell’s father had had lobster hands, making Dell a freak by blood – she informed the strong man that she was getting an operation to remove her “dingaling” and moving her 100 percent female self 100 percent on. “I’m gonna get me my normal life,” she hissed, “but not with you.” She’d soon be too much woman for him, anyway, she added.

CLOWNING AROUND | Back at the gay bar, no sooner had Dell left than Dandy appeared before Andy. Faster than we could say “This won’t end well,” the budding serial killer had the hustler back at Twisty’s bus, stripped down to his tighty whiteys and suffering from so many stab wounds that he choked on his own blood. He didn’t die quickly, though, which really pissed off Dandy. “You’re making me feel bad,” he whined. “Stop it!”

The following morning, Dandy surprised his mother by appearing on the terrace in nothing but his undies and a thick coat of blood. Somehow, this was still not the worst thing that happened to Gloria that day: That would be a phone call from Dora’s daughter, Regina (Gabourey Sidibe), who wondered why her mom would have missed their weekly chat. Gloria’s solution? Suggesting the girl not call again for a month. (That’ll work.)

Since Andy refused to think of Dell as anything more than a client who talks big, the strong man couldn’t afford to lose his (beardless) beard. So he paid a visit to that nice doctor and bent all of his fingers back until they snapped! “You keep your hands off my wife,” he barked, “and I’ll keep my hands off your family.”

Finally, jealous of the Tattlers once again stealing away the spotlight, Elsa lied that, besides offering her her own show, Stanley had asked her to mentor them. To that end, she said that she was taking them to a seamstress in town. Except, instead of any seamstress, she drove the twins to the Mott residence and offered them to Gloria for Dandy!

OK, your turn. What did you think of the episode? Were you sorry to see Matt Bomer come and go so quickly? Hit the comments!