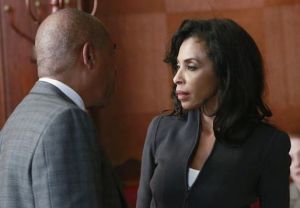 ABC’s Scandal is poised to go out with a bang as it heads into its winter recess.

TVLine has learned that in the fourth-year drama’s fall finale, titled “Where the Sun Don’t Shine” and airing Thursday, Nov. 20, Khandi Alexander will reprise her role as Olivia’s one bad mother, Maya Pope/Lewis.

Maya last was seen in the Season 3 finale, when after being expertly framed by husband Rowan for Jerry Grant Jr.’s murder, she was thrown into “the hole” where B613 keeps the best of the worst.

Since then, of course, blame for the First Son’s murder (as well as the killing of Gladiator Harrison Wright and Maya’s lackey Adnan Salif) has been shifted to Olivia’s lover Jake, who is now en route to a supermax prison after being spared a grislier B613-determined fate by President Grant.

Following its winter hiatus, Scandal will return (at a date TBA) with the remaining 13 episodes of Season 4.