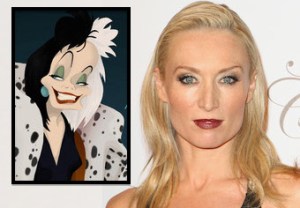 The residents of Once Upon a Time‘s Storybrooke may want to hide their dogs.

Dracula alumna Victoria Smurfit is set to recur on the ABC drama as an “iconic character,” EW.com reports.

The details of the role, which will first be teased in the winter finale, are being kept under wraps, but we’ve uncovered some early (possible) clues.

Given the boastful description and Smurfit’s striking looks — not to mention a fan report that Emilie de Ravin was filming a scene with a dalmatian on Monday — we’re placing our bets on the actress playing villainess Cruella de Vil. Plus, at last year’s New York Comic-Con, the show bosses listed Cruella (as well as Rapunzel, who has since appeared in a Fairytale Land flashback) among the characters they hoped to tackle.

UPDATE: And then there is this Tuesday night tweet, from Smurfit herself:
https://twitter.com/VictoriaSmurfit/status/529824405174886400

Series cocreator Eddy Kitsis previously told TVLine of the Season 4B arc, “The seeds are planted in the first 10 [episodes], so that when you see [the fall finale reveal] in 11 you go, ‘Ah, OK.’”

Once Upon a Time fans, what’s your theory on Smurfit’s iconic persona?