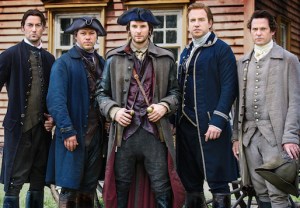 The History channel has set a premiere date for Sons of Liberty, its three-night Revolutionary War-era miniseries.

Airing January 25, 26 and 27 at 9/8c, the mini follows a defiant and radical group of young men — Sam Adams, John Adams, Paul Revere, John Hancock and Dr. Joseph Warren — as they band together in secrecy to change the course of history and make America a nation.

The photo above features Ryan Eggold (The Blacklist) as Warren, Michael Raymond-James (Once Upon a Time) as Revere, Ben Barnes (The Chronicles of Narnia) as Sam Adams, Rafe Spall (Prometheus) as Hancock and Henry Thomas (E.T.) as John Adams.

History released the slightest of teasers below. Will you be watching?