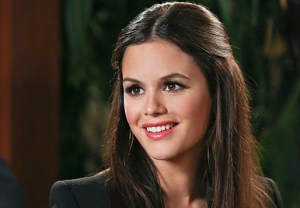 Pregnant or not, here she comes!

Dr. Zoe Hart, along with the rest of the BlueBell gang, will return for Hart of Dixie‘s 10-episode fourth season on Friday, Jan. 9, at 8/7c, The CW announced Tuesday.

As for whether or not Rachel Bilson’s titular character will have a bun in the oven this season, that remains a mystery… for now.

“[Dixie creator] Leila Gerstein is planning to have a pregnancy eventually happen to the character of Zoe Hart,” CW President Mark Pedowitz told reporters back in July. (Key word: “eventually.”)

Masters of Illusion, hosted by Dean Cain (Lois & Clark), also returns Jan. 9 at 9 pm, leading into reruns of Whose Line is it Anyway?

Dixie fans, what are your hopes for the show’s fourth season? Are you crossing your fingers for a Zoe-baby? Drop a comment with your thoughts below.