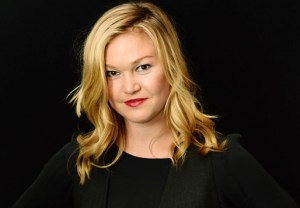 Forget what you’ve heard: Julia Stiles is, in fact, saving the last dance for The Mindy Project‘s Ike Barinholtz.

RELATED The Mindy Project Recap: A Kiss to Build a Scheme on

Stiles (Dexter) will guest-star on an upcoming episode of the Fox comedy as a potential love interest for Barinholtz’s Morgan, Entertainment Weekly reports. She’ll also be a friend of Danny’s.

Did we mention her character is also a compulsive hoarder? This can’t end well.

* Bravo has released the first trailer from the upcoming fifth season of The Real Housewives of Beverly Hills, which now counts Lisa Rinna and Eileen Davidson among its ranks. As expected, it’s completely insane.

* True Blood‘s Jim Parrack will recur on ABC’s Resurrection, according to The Hollywood Reporter, playing a “returned” preacher from the 1930s with mysterious connections to Bellamy’s biological family.

* Jay Leno will visit The Tonight Show this Friday, marking his first guest appearance since handing over the reins to Jimmy Fallon earlier this year.