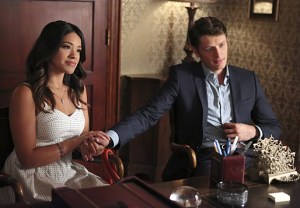 On Monday night’s Jane the Virgin, our titular heroine is hot and bothered, while her betrothed Michael is just bothered. Meanwhile, this recapper becomes more torn than ever between Team Fiancé and Team Baby Daddy.

The best love triangles are evenly matched, where you can see the girl (or guy, as the case may be) ending up with either one of her suitors. And after a couple of weeks of experiencing the crazy chemistry between Jane and Rafael, this episode shows us why Michael, despite all his current lying and sneaking around, is a valid choice of endgame.

The emotional rollercoaster begins with Jane struggling with her feelings for Raf — complete with unwelcome, halo-ed visions of the hotelier. Even worse, she has a sex dream about him while Michael is sleeping over! Xo advises her daughter to keep her mouth shut, but the truth comes out during pre-cana, which a caption tells us is Catholic pre-marriage counseling led by “a priest who has never been married.”

The Father (fittingly played by Ugly Betty alum Tony Plana) has been told by his parish to try to make himself more accessible to a younger demographic, so he uses a poorly conceived metaphor describing Jane and Michael’s marriage as an all-terrain vehicle that will hit bumps in the road. The first such obastacle comes when Jane explains her bun in the oven to the priest, a special situation for which the parish pep talk did not prepare him. When he asks if there’s a physical connection with the baby’s father, Jane reveals the details of her dream — because she cannot lie in front of a man of the cloth.

Naturally, Michael is upset. Jane tries to keep her distance from Raf to ease his concerns, but that proves difficult…and dangerous. She keeps backing up so much from Rafael during a conversation that she falls into the hotel pool.

“It’s four feet, Baywatch!” she exclaims when he dives in after her.

“I’m sorry. I didn’t know if you could swim,” he replies.

“You know I can stand, right?” she says with a laugh as he brushes her wet hair out of her face. The whole exchange is adorable and hilarious and swoon-worthy, so, of course, a heartbroken Michael witnesses it.

“I love you,” Michael later tells Jane. “I want to be with you forever. But if you have feelings for another guy, I don’t think we should be getting married.” 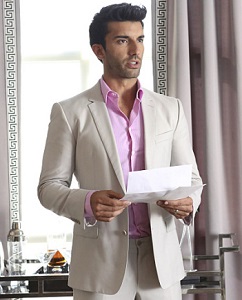 So Jane tries to erase Michael’s mental picture of her and Rafael getting frisky beneath the sheets by writing a very sexy letter. “Jane was a virgin, but not a saint,” the narrator notes. Too bad the steamy surprise accidentally gets swapped with a hotel piece Jane’s been writing for Rafael. While she is clearly a very talented and descriptive writer, he just sees her as a sister, Raf tells Jane. Goodbye, halo!

Meanwhile, Michael comes to an epiphany about why he’s been going out of his way to protect Petra. With his back to Jane — so as not to see the wedding dress she’s trying on — he confesses that he had viewed raising another man’s baby as the worst case scenario — but now he realizes that would actually be losing Jane.

“If you want it, I’m all in,” he promises of the child he’s realized isn’t just Rafael’s, but Jane’s, too. He just wants whatever she wants. And if this moment doesn’t warm your heart, you may want to look for the nearest defibrillator.

Just as it seems Jane and Michael are back on track, another sex dream strikes — but this one belongs to Rafael, and his baby mama is the star! So while Jane may be sure of her feelings for Michael, I remain as confused as Rafael. Help?! (Or at least vote in the poll at the end of this recap!) 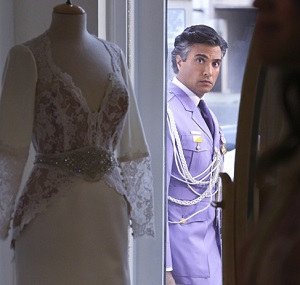 * Jane finally finds out the truth about Rogelio when he comically spies on her bridal appointment. She doesn’t fare so well at handling the news that her mother has been lying about her father’s identity, shooing them all out of the store.

* Michael Rady (Emily Owens M.D., Melrose Place) makes his debut as Lachlan, whom Rafael’s father promoted over his ex-playboy son. Lachlan also has a history with Petra: she was once engaged to him before marrying Rafael! She ends up screwing her ex once again, but not the way he likes, when she manipulates him so her husband can get the upper hand on a hotel deal. Rafael appreciates her skills even more now that he’s not blind.

“So how long were you sleeping with Zaz, anyway?” he asks casually before declaring, “We’re done, Petra. But thank you for helping with Lachlan.”

* Speaking of the secretive blonde, Petra meets with a mysterious and thuggish man in a car, where they discuss money and “Natalia” — her real name? A secret daughter? — in Czech.

* Rafael thinks his sister Louisa is on a bender. A concerned Rose calls to warn her that if she doesn’t show up for a hearing, Jane will get a default judgement and Raf will lose his share of the hotel.

Jane the Virgin fans, what did you think of “Chapter Four’s” steamy dilemma? What’s Petra hiding? And are you as torn as I am about the genuinely good men in Jane’s life? Sound off below!