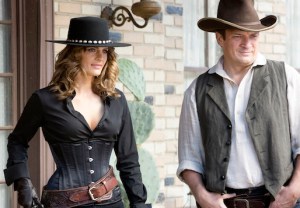 Are the first photos from Castle‘s trip to the “Old West” all kinds of fun? Of corset they are.

In the ABC series’ Terence Winter-penned, Nov. 17 episode — the first one following the you-know-what — when Castle and Beckett learn that a murder victim may have been poisoned at an Old West-style resort, they visit the “town” to uncover the truth, dressing the part every step of the way.

“They have to go undercover, in this case under the pretense that they are newlyweds — even though they are newlyweds,” showrunner David Amann tells TVLine. “They’re not there to go on their honeymoon; they’re there to solve a murder,” he adds. “But that doesn’t mean some fun can’t be had along the way.”

And as we all know, fun can involve ropes, and kissing. Check out the pics below.