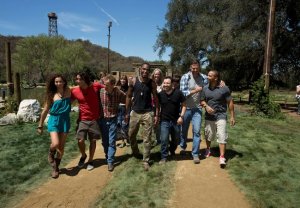 For the 15 residents of Utopia, it’s the end of the world as they know it.

Utopia‘s live-streaming feeds will fade to black later today. A Fox insider tells TVLine that it’s “likely” viewers will get to see the show’s participants react to the cancellation before the plug is pulled.

UPDATE: It looks like we won’t be seeing the cast’s reactions, after all. Executive producer Jon Kroll on Sunday confirmed the series’ cancellation, followed by this note about the live streams:

We are currently working with our 300 staff to help them move on to new employment. I will get back to you soon. but streams are done.

The harsh reality of low ratings felled Utopia right out of the gate. The two-hour premiere in early September drew a disappointing 4.6 million viewers. By Episode 2, that number fell 46 percent to 2.5 million viewers.

In early October, Fox scaled the show back to one day a week — that day being Friday — ahead of schedule. The 1.6 million viewers it notched this past Friday apparently sealed the show’s fate.