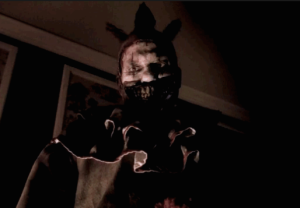 THE PERFORMANCE | Arguably, Lynch could’ve been Performer of the Week every week since Freak Show’s debut. After all, from the moment we saw him in costume as Twisty — and glimpsed the rage behind his haunted eyes — he scared us silly. But in the wake of his heartrending work this week, there could be no debate. Just as Mordrake’s demon face knew that Twisty was “the one” for their unhappy family, we knew that Lynch was “the one” for us. How could we not?

In beat after crushing beat, the actor made us feel more for his terrifying alter ego than revulsion — even with the clown’s ruined maw exposed. As Twisty told the tragic tale of his downfall — from popular children’s entertainer to failed toymaker — his portrayer forced us to put ourselves in his (metaphorically) oversized shoes. So, by the time he was through, we had no choice but to understand the frustration of being, as he put it, “a good clown” shut out of the vocation that gave him a smile that wasn’t drawn on his face.

In years to come, Twisty is sure to be remembered as being one of American Horror Story’s — and, for that matter, pop culture’s — most disturbing monsters. But, thanks to Lynch’s sensitivity, we’ll never forget that there once was beauty in the beast.

HONORABLE MENTION | The Middle ordinarily depicts firstborn Axl as the quintessence of self-confidence. So it was refreshing to see his portrayer — the hilariously loose-limbed Charlie McDermott — play a bit of uncertainty. When the college sophomore spent Halloween night locked in the library, he confessed to a bust of Shakespeare (which he named LeBron) that he had no clue what being a business major meant for his future. “Am I gonna be a businessman?” he wondered. That McDermott was able to give such a vulnerable performance without sacrificing any of Axl’s quirks suggests that he has in common with his character an enviable surplus of awesomeness.

HONORABLE MENTION | Throughout this early stretch of Marvel’s Agents of S.H.I.E.L.D.’s sophomore run, Iain De Caestecker has poignantly portrayed Leo Fitz as a brilliant young man whose world was rocked by a brush with death — and right on the heels of him professing his feelings for colleague Jemma Simmons. The salt in the wound: Simmons left FItz soon after, robbing him of the partner he’d long had at his side. As such, we’d been waiting for a Fitz/Simmons reunion, to gain greater insight into the “break-up,” and De Caestecker did not disappoint. Things were, to say the least, awkward as Jemma attempted re-entry into Fitz’s orbit, until her almost foreign presence on the Bus prompted him to snap, emotionally, “You left! I needed help…. You gave up on me.” De Caestecker broke our hearts — for not the first time this fall — as Fitz struggled to make sense of the abandonment. Little does he know, as Jemma would reveal to Mac, she only left out of concern for his well-being.