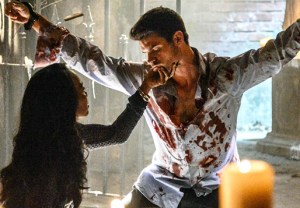 Some moms express their love with hugs. Others with words. And then there’s The Originals‘ Esther Mikaelson, who chooses to shower her children with whips and blood.

A new batch of photos from the CW drama’s Nov. 10 episode — the one right after Nina Dobrev’s guest appearance — find Elijah at his mother’s mercy (and by the looks of things, he does not like it rough).

So… What exactly does Esther have planned for her son?

“She needs to make a case for why being a vampire is the worst thing,” executive producer Michael Narducci teases. “She can save him by putting him into another body and giving him one mortal lifespan to know peace and to have happiness and have a family of his own and live a semi-natural life. Being a vampire is unnatural. He can go into the body of a witch and have a more natural life, according to Esther.”

Body swapping? No, no. This will not do at all.

Browse new photos from the episode below, then drop a comment with your thoughts on The Originals‘ second season.