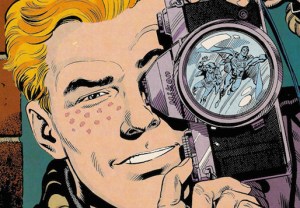 On the heels of sharing details about the casting for Supergirl‘s titular heroine and her foster sister, TVLine now has the scoop on four other series-regular roles to be filled on the drama, which already has a series commitment from CBS.

CAT GRANT | The project is eyeing females in their 40s, open ethnicity, to play the founder of CatCo, a media conglomerate that Cat built from the ground up. Kara (Supergirl’s mild-mannered alter ego) will work as a personal assistant to Cat, who is described as “J.Lo by way of Anna Wintour.”

JAMES OLSEN | In his late 20s/early 30s, open ethnicity, James is a smart, worldly and (duh) attractive photographer for CatCo. Though an alpha male, his salt-of-the-earth nature elicits a huge ol’ crush from Kara.

WINSLOW ‘WYNN’ SCHOTT | This twentysomething tech whiz/Comic-Con stalwart toils for CatCo as a programmer, unaware of his own (toying?) potential. Unware of her secret, he carries a torch for Kara, whom he lives next door to.

HANK HENSHAW | As an upstart CIA agent, Hank grew obsessed with intergalactic intel. Now in his 40s and lording over the DEO (Department of Extra-Normal Operations), he is on high alert when Supergirl reveals herself, worried that her otherworldly abilities pose a threat to humankind.