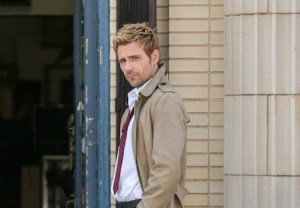 At 4:30 on Thursday morning, a short time before the sun begins to peek over the horizon, Constantine lead Matt Ryan wraps his last scene of the day and goes home to rest.

Just a few hours later, he’s on the phone with TVLine. Doing press on minimal shut-eye isn’t fighting fiery hellbeasts, but it can’t be the most fun he’s ever had, either.

“I’ve just woken up,” the actor says good-naturedly, his Welsh accented voice sounding a little rougher than usual during a chat about his new NBC drama. “I’ve put my eggs on the stove, poured myself a coffee.”

When we remark that it’s impressive he’s able to string words into sentences on not much sleep, Ryan laughs. “We’ll see about that.”

The main reason we’ve rousted the actor from some much-needed slumber: This week’s episode of his supernatural drama introduces Zed, a mysterious female character from DC Comics’ Hellblazer. (She was the one sketching John at the end of the premiere.)

Where Liv — whose departure at the end of the series’ premiere was a permanent one — was a wide-eyed neophyte regarding the supernatural, Zed (played by Telemundo star Angélica Celaya) knows a little something about the dark side. Read on as Ryan previews what to expect from the new series regular and forecasts other Season 1 additions to Constantine’s ragtag band of the damned.

TVLINE | Zed first appears in Friday’s episode (10/9c). Do they get along at first?
No, they don’t. What’’s interesting is, John thinks she’s stalking him. She’s got a picture of him that she’s been drawing, and he’s like, ‘Who is this woman?’ But then he finds out that she’s got some kind of abilities going on. He’s got this case, and he feels that she could be useful.

She’s feisty. She’s someone with this special ability, with a very secretive past, who’s slightly tormented. But at the same time, she’s very driven and gets up in John’s face and doesn’t take any of his s–t. 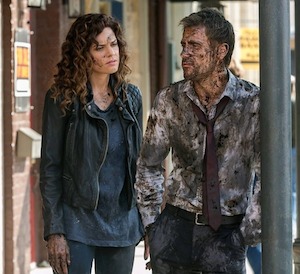 TVLINE | And he dishes out a lot of it
He does. And you know what? As we go down the line, he puts out more s–t. With any show, you have the pilot and then a few episodes, and you really find your groove, the writers, the characters and everything. We really feel that we’ve taken it to some interesting places. Some of the stuff we’ve got in the episodes is crazy.

TVLINE | How crazy?
In one episode, I’m naked, covered in blood, doing a sermon while I sacrifice a chicken. [Executive producer] David Goyer co-wrote that episode. I think the writers sit in the writers’ room and go, “What can we do to Matt Ryan this week?” [Laughs] Some of this s–t they put me through, man… [Laughs] It’s great, they way they’re really sticking to the Hellraiser stuff. It’s getting really dark, as well.

TVLINE | John Constantine is a hero who is not a well man.
I think that’s the great thing about him, and that’s the great thing about playing him. He’s tormented, he’s guilt-ridden. He’s got all of this s—t going on underneath him, but then he flips the bird. He gives the middle finger. What’s so interesting is playing those shifts. As an actor, you get to play some of the real deeper emotional stuff going on and also some of these great one liners, where he just doesn’t give a s–t. We actually did a scene last night where, in the middle of all of this stuff going down, there’s this one line. And the director’s like, “I’m not too sure about this line.” And because I’ve been doing this for a while now, I was like, “Look, trust me. That’s John. Even in the middle of that, he pulls one out of the hat.” And it really worked. I love that about the character. I think that’s really unique to him.

TVLINE | Friday’s episode takes place in a Pennsylvania mining town. Is Constantine using the map Liv left as a way to find where trouble is brewing?
For now, yes. That’s how he tracks down the rising darkness to gain redemption for his soul. It’s kind of a selfish pursuit, but it’s not at the same time, because he’s trying to save humanity from the rising darkness… They use the scrying map to find out where the rising darkness is surfacing and head it off, so to speak.

TVLINE | Is he a one-off? Or will he be around again this season?
He comes back. He comes back a few times. What’s great about that relationship is, they’re uneasy allies. We see them go through working together and then hating each other and needing each other. They’re both practitioners of magic, but Papa Midnite’s rather specific to voodoo, while John’s a street magician. He uses whatever he needs to get what he wants. He mixes and matches his magic. That’s a conflict between them, as well. We see him come back a few times this season.

TVLINE | You mentioned that he’s an uneasy ally. Does John have any easy allies?
No. Exactly. There’s a great line… at the end of the pilot: “Who would walk my path with me? Who would be crazy enough to walk this path with me?” It’s good. He’s lonely. He’s a lonely soul at the end of the day, because he’s driven by this compulsion to seek out the dark things in the world. But that’s also his addiction and his adrenaline rush and what drives him.

TVLINE | In the pilot, we heard a little about the events that surrounded Astra’s damnation. Will that incident be revisited in the episodes that follow?
We introduce a bunch of characters from the Newcastle Crew, where that incident took place. There was a whole crew of people around John at that time. In Episode 4, we see Gary Lester. And we get to see Anne-Marie. If we get the back nine [episodes], we’ll definitely be visiting some other characters from the Newcastle Crew and definitely be doing an episode that takes us back to that time.