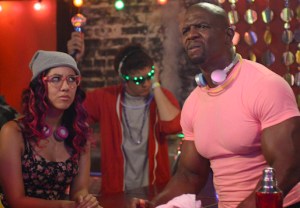 This Sunday on Brooklyn Nine-Nine (Fox, 8:30/7:30c), the key to kicking Captain Holt’s anti-drug task force into high gear may lie in Rosa and Terry hustling some leads at a “silent disco” — if there is such a thing.

Oh, but there is, both Sgt. Terry Jeffords and his portrayer Terry Crews learned, as shared in the video below.

Press play to hear Crews explain the seemingly contradictory concept, as well as get a glimpse as young Terry Jeffords’ mad disco moves.