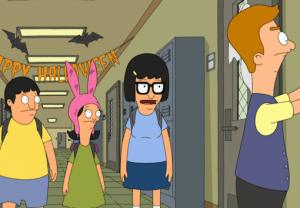 We’re with Bob’s Burgers‘ Louise: Why do anything besides trick-or-treat on Halloween, “a day when you can knock on people’s doors and they literally hand you free candy?”

But Tina’s got other plans for the holiday, as you’ll see in this exclusive sneak peek at Sunday’s episode (Fox, 7:30/6:30c).

The cool kids at school are planning on hanging out in the graveyard, and the eldest Belcher child is determined to be there, too… even if her classmates, including the object of her affection, don’t seem to want her around.

But don’t worry about Tina: Elsewhere in the episode, she begins a romance with a ghost believed to be haunting the Belcher’s basement. (Hasn’t she seen the first season of American Horror Story?!)

Press PLAY on the clip to watch Tina (Spoiler alert!) get shot down yet again.