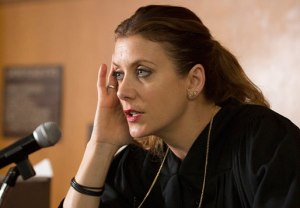 The verdict is in, and Bad Judge is out.

NBC has issued its first cancellations of the fall season, ending the Kate Walsh-led series and the freshman rom-com A to Z, our sister site Deadline reports.

Both Thursday-night series will be allowed to finish their 13-episode orders. Bad Judge has shot 10 episodes; A to Z has shot 11.

Both shows had seen relatively steady declines since their premieres. This Thursday’s Bad Judge grabbed 4 million viewers and a 0.9 demo rating (down a tenth), while A to Z (2.6 mil/0.7) fell 16 and 22 percent.

Thoughts on the cancellations? Sound off in the comments!