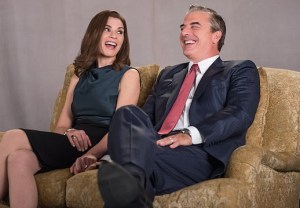 When last we saw The Good Wife‘s Alicia and Peter Florrick, they were engaged in a scathing, no-holds-barred argument in a service hallway of a Chicago hotel. (OK, yes, the Illinois governor eventually caved in and showed up at his wife’s campaign kickoff for State’s Attorney, but it wasn’t exactly the Portrait of a Blissful Political Marriage.)

In the following first-look images from the show’s Nov. 16 episode (9/8c on CBS), however, temperatures look decidedly warmer — at least while the cameras are rolling, anyway. There’s laughter, a smooch and… a campaign manager (Steven Pasquale) to keep things running smoothly. But Saint Alicia doesn’t exactly look thrilled as Peter’s old pal Ramona Lytton (Connie Nielsen) shows up and whispers something in his ear.

CBS’ official description for Episode 9 — which is still awaiting an official title — reads as follows: “Alicia faces a crisis of conscience when she’s encouraged to go negative in her campaign for State’s Attorney. Meanwhile, the Feds try to persuade Cary to work with them as they attempt to build a case against Lemond Bishop.” Pics of David Hyde Pierce’s legal commentator Frank Prady are in the mix, too.

We’ve also got images from Episode 8 (Nov. 9) in which Alicia appears to be volunteering at a soup kitchen — alongside Finn Polmar? — and scrubbing pots and pans while rocking a designer suit.

That episode is described as follows: “Alicia takes on a college rape case which pits her against Louis Canning when it moves from a university hearing to civil court. Meanwhile, Eli and Elfman conduct a political focus group as Alicia dives into her campaign for State’s Attorney.”

Click through the gallery below for a tease of what November holds in store for The Good Wife — then sound off in the comments with your thoughts!