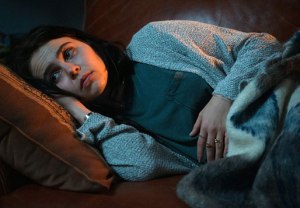 If Thursday’s episode of Parenthood was the first time you’d ever seen the NBC drama — well, as a side note, what have you been doing all this time? — your opinion of Amber Holt would likely be that she’s one of the most mature members of a family that’s single-handedly keeping Kleenex in business.

But for those of us who’ve been watching since the beginning — hell, even if you only tuned in last season and saw Amber foolishly rush into an engagement — you were likely blown away by the leaps and bounds by which she has grown in recent months. Could this really be the same girl who wanted to run off with her deadbeat Fresno beau while still in high school? The same girl who slept with her cousin’s boyfriend before they were officially broken up? The same girl who got into a horrifying car accident after she let her co-worker drink and smoke pot behind the wheel?

Taking Amber’s past five years into consideration, it was even more shocking (y’know, in an awesome way) to watch her maternal instincts kick into gear during Thursday’s hour, as she (and quite a few other Bravermans) navigated particularly choppy waters.

MONEY ON MY MIND | The episode picks up three months in the future, where Amber is sporting a serious (and adorable!) baby bump. Sirens first go off in her head when, on a baby-related shopping trip with Drew, she realizes just how little she can actually afford on her salary from The Luncheonette. But when she confronts Adam and Crosby about getting a raise — when was the last time “commensurate” was used in casual conversation? — it dawns on Amber’s uncles that their recording studio might really be at risk this time, something they both react to in very different ways. Ever the level-headed one, Adam assures Amber that even though he doesn’t have a back-up plan, he’s not going to quit until she gets the salary she deserves. (Awww.)

Meanwhile, Crosby goes into a tailspin about finances, especially after Jasmine prices out a potential trip to The Wizarding World of Harry Potter for Jabbar’s birthday. (Good on Jabbar for having his birthday wishes prioritized correctly. Harry Potter always comes first, and everything else is a footnote, frankly. Especially when it’s in the name of NBC Universal corporate synergy.) After Jasmine assures her husband that she’s only concerned about losing him, and not their house, the Super Parenting Duo throws Jabbar a truly awesome Potter-themed surprise party in the backyard, featuring a rather spot-on Sorting Hat impression from Crosby. (Once more, with feeling: Awww!)

Still, the family’s looming financial issues continue to weigh on Drew’s mind, so much so that he declares economics as his major. And even though Natalie tries to assure Drew that his major won’t really matter down the line, Drew knows he’s got a responsibility to his family, as he’s the first one to go to college. (Side note: I know it’s been mentioned before, but seriously, how wise has Drew gotten? He was brutally honest with his somewhat-spoiled girlfriend, and didn’t even break a sweat!)

I’LL BE THERE FOR YOU | When Amber’s not worrying about her job security, she’s saving the day for Sarah and Hank after Ruby decides to crash with her dad for a while. After a game of Celebrity goes from fun to disastrous in about 5.2 seconds — thanks to Hank not knowing his daughter’s food allergies — Ruby sneaks out to a party that night and comes back absolutely wrecked, prompting Amber to stick by her side while she worships the porcelain god for a while. The next morning, Amber lays out the truth for Ruby: Hank is doing the best he can — way better than Amber’s dad ever attempted to do — and Ruby should try cutting him some slack. So, later that day, Ruby 2.0 emerges from her bedroom, offering her dad an apology, a hug and an “I love you” before heading to a friend’s house. Could Amber really have tamed the beast? Here’s hoping!

TEENAGE DREAM | Even though Max’s crush Dylan still only likes him at a 2.5 — something Max will one day learn to be “The Friend Zone” — Dylan’s still spending quite a bit of time at Adam and Kristina’s. Playing with Nora and Otis? Check. Sleeping over multiple times? Check. Curling up next to Kristina as she watches To Kill a Mockingbird? Uh… check! Kristina gets concerned that Dylan’s only interested in hanging out with Max’s family, but Dylan assures her that Max is awesome — just a bit boring sometimes. (Which is a pretty accurate assessment of teenagers in general.)

OK, your turn. What did you think of the episode? Joel/Julia fans, isn’t it depressing to think that Julia has been dating Chris off-screen this entire time? Sound off in the comments!