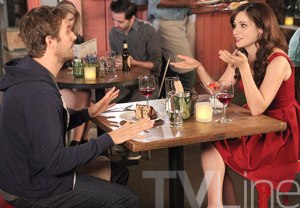 If attending an education conference means winding up in the arms of New Girl‘s Julian Morris… have we ever mentioned how much we love learning?

Jess experiences one of those close encounters with Morris’ Ryan in an upcoming episode of the Fox comedy, and TVLine has your exclusive first look at that moment — and much more.

The gallery below features shots from the episodes airing Nov. 11 and 18. First up is “Goldmine,” a half-hour that finds Nick pretending to be gay so Jess’ new guy (played by Michael Stahl-David, Cloverfield) is less weirded out by his presence at the loft. Meanwhile, Coach isn’t pleased when Winston works his patented “Long Game” on neighbors Michelle (returning guest star Alexandra Daddario, True Detective) and Viv (Amber Stevens, Greek).

The following week, in “Teachers,” Jess, Coach and Ryan attend the aforementioned teachers’ conference — led by a rockstar educator played by Lisa Bonet (The Cosby Show) — while Schmidt, Nick and Winston try to have a raging guys’ weekend while Jess is away.

Click through the gallery below, then hit the comments: If Jess and Nick can’t be together, isn’t Ryan a really good consolation prize?