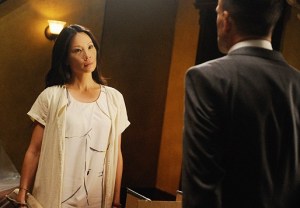 You don’t have to be Sherlock to figure out that Season 3 of Elementary is going to be a bit different.

Thursday’s season premiere made that pretty clear when it took nearly 13 minutes (sans ads) for Holmes to even appear — and in a creepy helmet, no less. Instead, the opener took its time establishing Joan’s new way of life, picking up six months after the events of Season 2. She’s got an amazing apartment, there’s a meet-cute with her neighbor’s brother (played by Smash’s Raza Jaffrey) involving a lizard and she’s successfully working as a P.I. on her own.

Our second taste of Elementary‘s revamp comes via Sherlock’s new protégé Kitty (Ophelia Lovibond), whom Joan first meets in the park when she suspects Kitty is following her. She was, per Sherlock’s orders. He wanted to see how Joan was faring in his absence, which, as established, is remarkably well. But Joan doesn’t know all that yet as she heads to the brownstone in search of a book relating to her case. That’s when she discovers Sherlock is back in New York City! She’s still hurting from the fact that he abruptly left for London without a goodbye, so she doesn’t particularly care that he’s returned or why; she just wants him to stay out of her case.

“You were right, I didn’t need you anymore,” she says. “Still don’t.” Brrr, did a cold-front just pass through the brownstone?

After a baton face-off with Kitty, Joan realizes the woman is not a stalker, but rather Sherlock’s new partner. And the fight doesn’t earn Kitty any points with Sherlock, who isn’t happy that she went beyond just following Joan. But Kitty couldn’t help herself; she was curious about the original model he never stops talking about. The way Sherlock chides Kitty, it’s clear their dynamic is quite different from the one he shared with Joan, who was much more self-assured and self-possessed during their partnership. We also get a sense that Kitty is troubled when she refers to “moving towards something,” hinting at a dark past.

Meanwhile, Sherlock tries to mend his relationship with Joan. He reveals that he left New York because he was afraid he would give into drug temptation, and he didn’t want to fail in front of her, so he ran away from it all. However, he was wrong to make Joan the face of his problems, and he kept his sobriety intact even though he was on his own. He also found that being a mentor was his calling. Thus, Kitty. Even after all this, Joan wonders why he came back to New York when he could have gone anywhere.

“Isn’t it obvious? I belong here. As do you,” he replies, and Jonny Lee Miller imbues the small exchange with so much meaning.

So although Joan initially seems indifferent to Sherlock’s olive branches and confessions, she does eventually give her OK to Captain Gregson, allowing Sherlock and Kitty to also work with the NYPD. They’ll both work on their own cases, she explains and then offers a fresh pair of eyes should he ever need one.

Elementary fans, what did you think of the new dynamic between Sherlock and Joan? Did you like Kitty? And do you have any theories about her past?