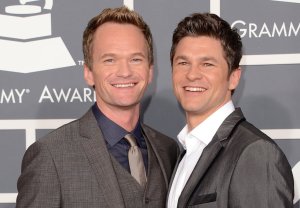 TVLine has confirmed exclusively that Harris and his real-life husband, David Burtka, are set to guest-star on FX’s anthology smash.

Harris will appear in Freak Show‘s 11th and 12th episodes as a chameleon salesman, while Burtka will turn up in the season finale (Episode 13) in what I’m told is a sexy storyline with Jessica Lange’s batty chanteuse.

Earlier this month, Horror Story puppetmaster Ryan Murphy — who invited AHS super-fan (and good friend) NPH on the show via Twitter back in August — told TVLine of Harris’ forthcoming Freak Show stint: “He had very specific ideas for what he wanted to do, and I had very specific ideas, so we’re working on melding those.”

Murphy and Harris’ previous collaboration — a Season 1 episode of Glee — netted the How I Met Your Mother actor an Emmy for Guest Actor in a Comedy Series.

The Freak Show development caps a busy news cycle for Harris, who was recently tapped to host the 2015 Oscars and headline his own NBC variety series.