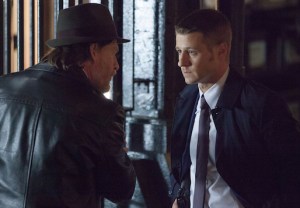 The Arkham district and its namesake asylum are “central” to the mythology of Fox’s Gotham (airing Mondays at 8/7c), and as such will loom ever larger as the DC Comics-based drama continues its freshman run.

In the exclusive featurette below, showrunner Bruno Heller talks of how Arkham’s creation myth — first and barely hinted at in the Oct. 13 episode — will inform Gotham‘s own, especially as the show unearths some of the asylum’s dark secrets (including how it has helped foster a “breeding ground” for “over-the-top, larger-than-life” villains).

Do you look forward to learning more about Arkham, the asylum and its larger role in the Gotham narrative?