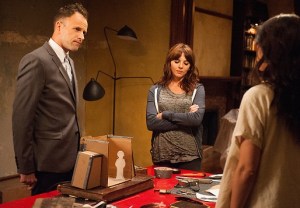 Sherlock resurfaces in New York during Elementary‘s Season 3 premiere on Thursday (CBS, 10/9c), but he won’t be getting a welcome-home party — or even just a warm welcome — from Joan.

Tensions between the former partners are at an all-time high thanks to the fact that Sherlock disappeared without a word and now, just as suddenly, he’s returned with someone new by his side.

How will the two women in the P.I.’s life get along — if at all? Do Sherlock and Kitty have a secret agenda for coming back to NY? And will a new Big Bad torment our players in Season 3? Below, executive producer Rob Doherty takes on those questions and more.

TVLINE | How different are things for all the characters in Season 3?
Approximately eight months have passed since the events of the Season 2 finale, and we start with Joan. We see that she has constructed an honest-to-goodness life since Sherlock left to work with MI6. She has her own apartment, she is in a relationship and, in addition to continuing to consult with the NYPD, she has taken on a handful of private clients. It is not long, however – spoiler alert – before Sherlock resurfaces. And it is understandably very awkward. We’ll find out that Sherlock left New York without so much as a goodbye.

But the most surprising thing of all is he has taken on a new protégé in Kitty Winter (played by Ophelia Lovibond), [who] is based on a character from canon. Kitty Winter was a very small but very important character in “The Adventure of the Illustrious Client.” So even though she doesn’t get a ton of attention in the story, she stood out to us, and when it became clear we were going to have Sherlock come back to New York with a new partner in tow, Kitty became this very intriguing candidate. And the more we talked about her, the more we liked the idea.

TVLINE | What brings Sherlock back to New York? Is there a specific reason?
Yes. In the premiere, Sherlock alludes to certain plans with respect to New York, but it’s not something he or Kitty elaborate on. Most importantly, he enjoyed the most successful professional relationship of his life in New York, and to a certain degree, he thinks the only way to come close to replicating that experience is by coming back. Again, London didn’t work out. MI6 didn’t work out. He has decided to become a mentor again because he thinks it will be helpful to him and his process. But geography plays a factor in what he does. 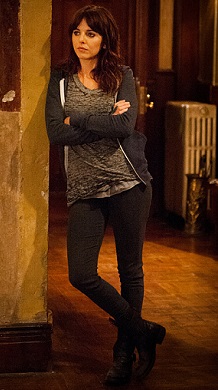 TVLINE | You mentioned that Kitty and Sherlock have reasons for coming to New York. Is there a bigger, grander mystery that will flow over the whole season? Or am I reading too much into it?
No, not at all. Kitty has something of a murky past, and that’s something we will speak to very early in the season. Like the character she is based on, she went through a terrible trauma and recovered from it and, eventually, caught the eye of Sherlock Holmes. Sherlock is very aware of her personal history. As a character, I would say she’s very coiled. She is certainly rougher around the edges than Joan Watson is or was. And so, to a certain degree, Sherlock treats her differently, but not when it comes to instruction. He is, as always, a taskmaster. But he’s also sensitive to the fact that Kitty needs help in other areas. Something we’ll see right away is that Kitty is very driven and more desirous of the education that Sherlock’s offering than Joan was when he first met her. Joan had this very specific function in Sherlock’s life in the beginning, and it changed very gradually over time.

TVLINE | Are Joan and Sherlock, as rivals now, going to be forced to work together when it comes to assisting the NYPD?
When Sherlock resurfaces, he would like to resume his work at Captain Gregson’s precinct, but learns very quickly it’s not up to the Captain. Gregson is willing to let him come back, but it has to be with Joan’s approval. The person who stayed, the person who the Captain can depend on, is Joan Watson. And so, he would not risk disrupting their collaboration by bringing Sherlock back in without her OK. So part of the business of the premiere is Sherlock, a very proud person, attempting to explain this to Joan and get her permission to return. I don’t think I’d be giving away too many secrets to say you will be seeing them around the same precinct and around characters such as Gregson. But at least early on, we want to try to give them each their own investigative work and trajectories.

TVLINE | How do Joan and Kitty feel about each other?
Things don’t get off to a great start for Kitty and Joan. In fact, their first confrontation is physical. So they most definitely get off on the wrong foot. Joan, of course, has never heard of Kitty, but Kitty has heard plenty of Joan. As far as protégés go, she’s the gold standard, and Sherlock will often, for better or worse, compare Kitty to Joan. And that can grate on you after a while. So Kitty is predisposed to, if not dislike Joan, then to be competitive around her.

TVLINE | Is there any kind of recurring Big Bad or ominous figure along the lines of Irene Adler or Mycroft in Season 3?
Golly. Caught on the wrong day, Kitty’s a little ominous. We will be building to something in the first half of the season, for sure. There’s a character from canon known as Baron Gruner, and he is an important part of Kitty’s backstory, in the short story and in Elementary. That’s somebody to keep an eye out for.