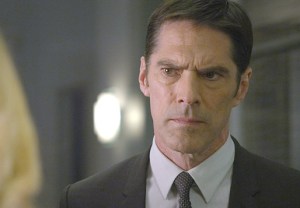 Halloween is an occasion oft mutually enjoyed by both parents and their kids, so it was fitting that as Thomas Gibson directed tonight’s episode of Criminal Minds (CBS, 9/8c), his 12-year-old son was among the guest cast.

TVLine invited Gibson to reflect on his latest turn behind the camera and the “treat” of it being a family affair, as well as share the “trick” to conjuring a compellingly creepy episode. Plus: How will Rossi help Hotch recover from a romantic setback?

TVLINE | So give me the bullet on this week’s episode. What’s going on?
We’ve got a guy abducting kids annually on Halloween for some strange reason, and after we find the kid that he’s released on the 30th we fly to San Diego on the 31st to keep him from grabbing another one. We kick into high gear and do everything we can to find this child — who happens to be best friends with a kid played by my son Travis. My daughter [Agatha, 10] is in it as well, as a trick-or-treater, and my oldest son, J.P. [15], who’s a budding filmmaker, shadowed me during prep and shooting and post, and also wrote a song on the radio that our bad guy’s listening to while he’s medicating himself.

TVLINE | Oh my God. It’s a family affair.
A complete family affair. It’s a long time that I’ve been doing the show, and my kids have seen little or none of [the show] which is appropriate …

TVLINE | And any opportunities for them to ever have a part in it are, like, slim to none.
[Laughs] Exactly. So now my son Travis wants to finish all of his schooling online and be a full-time actor. I said, “Hey, it’s not all riding bicycles and egging cars and houses. Why don’t you go finish the seventh grade, and we’ll talk about it later.”

TVLINE | Does this week’s UnSub have a suitably despicable endgame with these kids?
I think so. It’s one of those stories where you know he’s been horribly victimized and really can’t help doing it. I mean, obviously he’s an adult and hopefully adults make choices that keep them from hurting others, but he’s one of those ones that don’t have the tools to keep from sort of playing out what happened to him over and over. That’s a story that we hear about on the show all the time, because it happens in real life all the time. But J. Michael Trautmann, who’s on Shameless, did a wonderful job. And we were lucky to get Pamela Reed (Jericho) to play his mom. They all brought their “A” game.

TVLINE | Is it the luck of the draw when it comes to who gets which script to direct? Or do the writers say, “You know what, this is more of a Thomas script, this is more of a Matthew [Gray Gubler] script….”?
Part of it is the calendar. The couple of times I’ve directed before, I’ve done the episode where I prep before Christmas and shoot after, because of the fact that I live out of town. That helps me a bit. But this one was shot in early September, when my kids had just started school. But I was able to bring them here for a couple of days of shooting, which helped me see them while I was busy working. But yeah, it’s something of a roll of the dice. [Showrunner] Erica [Messer] put the great writer Virgil Williams and I together for this one, and we’re actually going to do my next one, [Episode] 1016, which is an UnSub-in-a-prison story.

TVLINE | Does it up the ante for the director, being handed a Halloween episode of Criminal Minds?
Well, the network said they wanted a big Halloween episode, so yeah, you want to be able to take that ball and run with it — and I feel like we did. There were a couple of times when I felt like maybe I could’ve made a richer choice cinematically, but that’s me being supercritical of myself. I think the story is effectively told and we managed to come away with some very rich choices both with actors and with the way we shot it. 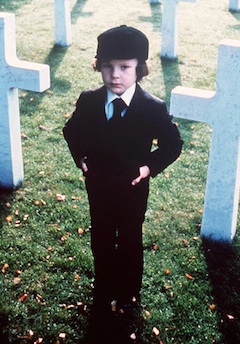 you’re more or less of my generation, where we grew up with the Michael Myers. I remember seeing that movie in broad daylight with my dad, and being terrified afterward.
I think actually avoided it for a while because I knew how badly I would take it, because I was pretty easily scared as a kid. I remember driving home from a movie — it wasn’t Halloween but another one, maybe the original Omen — and I dropped my friends off, and it was also broad daylight, and yet I was sure that, like, Damien was in the backseat or something like that. [Laughs] People’s imaginations are sort of there for the taking, I guess. If you tell the story right, you’re going to hook them.

TVLINE | Is there a trick or two that you’ve learned over the years, for making a Criminal Minds scene that extra level of spooky?
I think the trick that I’ve learned to make it work is to hire good actors. And here, I got lucky again. We got everybody we wanted. We actually lost one actor [to scheduling] who played the transvestite psychic, and Cornelius [Jones, Jr., Law & Order: SVU] stepped in with a day or two notice and hit it out of the park. He was absolutely fantastic. 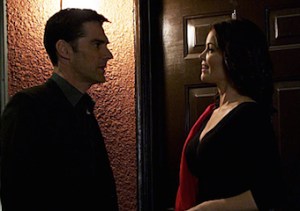 the show will be addressing the Hotch/Beth situation. That there’ll be no “happily ever after,” despite their best efforts.
That’s not this week, but yeah, it’s coming up. Unfortunately, you know, I was dating the First Lady and she’s busy! [Beth’s portrayer Bellamy Young stars on ABC’s Scandal.] So yeah, it’s actually dealt with in a nice way. Rossi then of course decides that he needs to play matchmaker for me, and we get very few opportunities for lighter moments like that….

TVLINE | I always enjoy seeing Rossi in that mode.
I do, too. Joe [Mantegna]’s obviously very good with pretty much anything they throw at him. It’s a lot of fun to do those scenes — we actually just shot one of those this morning and another one yesterday.

TVLINE | And lastly, what if anything are you hearing about Erica’s big, midseason plan to mark the show’s 10-year anniversary?
I’ve been busy with this other stuff, so I can’t tell you anymore details than you already have, but I know it’s going to be good!