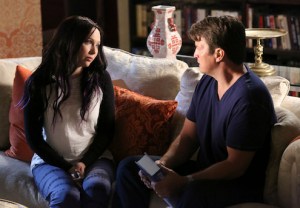 When ABC’s Castle resumes Season 7 on Nov. 10, the titular novelist’s life will get a rewrite, as the Case of the Week tees up a reality in which Kate (played by Stana Katic) never met Rick (Nathan Fillion) — and in which Alexis is brunette, apparently, based on these fresh photos.

Laying out the “rule book” for the reality-skewing episode, showrunner David Amann tells TVLine, “Castle has never written Nikki Heat, because he’s never met Kate, and she has no idea who he is” — not even as a successful novelist, mind you. “The people around him, including Martha and Alexis, are different as well, in different kinds of ways, in direct reaction to the path his life has taken.”

Meaning you can also expect to spy subtle changes in Ryan and Esposito, as a result of their Castle-free years.

“There’s a lot of fun to be had,” Amann promises. “Nathan is brilliant in it, playing the fish out of water situation. It’s a delightful episode” — especially, one must imagine, given the wedding bells that ring it to a close.

Check out the slideshow below, which obviously leads off with photos that precede Rick’s trip to the Other Side.