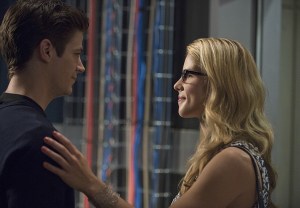 This week on The CW’s The Flash, a warm visit from Felicity could barely offset the cold reception Barry got from a new nemesis.

This episode, as the headline suggests, was cool for three reasons.

1 | UNFINISHED BUSINESS
Felicity crossed over from Arrow to check in on her lightning-struck, once-comatose friend Barry, sure, but also to obviously see if their “spark” was still there, or if it ever was. This made all the sense in the world given the “break-up” Felicity and Oliver went through in the other show’s season opener, that she would test the waters to see if Barry was in fact The One. Instead, they sat there on the train toward the end, laughing at themselves for being perfect for each other yet pining for someone they can’t have. “Opposites attract” and all. So as improbable as it is that Barry would leave things with the “remarkable” Ms. Smoak (as Wells aptly put it) at just a goodbye kiss, doing so frees Flash fans to further buy into the Barry/Iris thing. Theoretically. Polls!

2 | TEAMS UNITY
That Felicity during her visit got to talk semi-freely with the S.T.A.R. Labs peeps about her own role in another superhero business was simply awesome, both in how we saw the likes of Cisco fanboy over The Arrow and in how Ms. Smoak was able to pass along some knowledge as well as helpful hacks. (The argument she made to Barry about Team Arrow evolving one by one, whereas The Flash’s crew was thrust together overnight, was spot-on and delineated for the viewer the different ‘tween the two.) That said, I for one am not entirely OK with the mysterious Dr. Wells likely having deduced the Arrow’s identity, but we’ll give him some rope for now.

3 | COOL CUSTOMER
After three weeks of one-off villains, the introduction of “Captain Cold” (a far better name than Leonard Snart) was executed perfectly, both in the casting and the plotting. Wentworth Miller’s “Blue Steel” 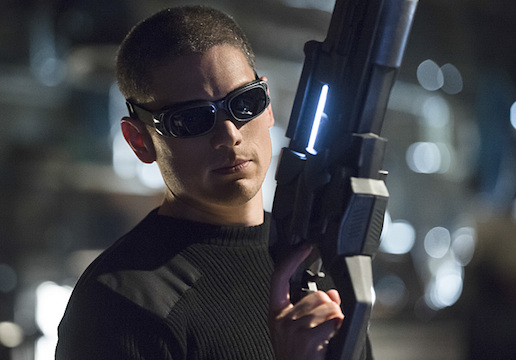 gaze suits the character well, and the tag at the end — in which Snart allies with Mick Rory aka Heat Wave, to be played in Episode 10 by fellow Prison Breaker Dominic Purcell, was the stuff geeky goosebumps are made of. It’s gonna be a long six weeks or so.

Elsewhere in the episode, what started off as a groan-worthy B-story about Joe’s feelings on the Iris/Eddie matter wound up packing some emotional punch, as the grizzled detective explained the burden he now has watching over his partner, knowing how difficult it would be for he and his daughter to look at each other should something bad ever happen to Eddie. With that established — and Joe having basically given his endorsement of the man who saved his life during a Captain Cold confrontation — I can’t imagine that plotline will take up much more oxygen moving forward, unless Eddie gets jelly of Iris’ fixation with the “red streak.”

NOTABLE QUOTABLES (AND THERE WERE SO MANY)

* “I want to see it. And by it, i mean your speed. In case you thought I was talking about something else. Which I wasn’t.”

* “Let’s just say that my team has a similar set-up… but with more pointy objects.”

* “Believe me, it took much more than watching Oliver do the salmon ladder to get me to trust him.”

* “when it comes to hacking, I’m the fastest woman alive!”

* And the big oops: “If i had a nickel for every time the Arrow told me to back off, I’d be as rich as Oliver Queen. Who I mention only because he’s the richest person I know. Or used to be.”

What did you think of Felicity’s visit to The Flash and the introduction of Captain Cold?