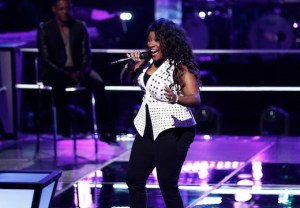 The current, ubiquitous single by Taylor Swift, international music superstar and the best guest coach in The Voice‘s seven season history — gay blasphemy coming atcha in 5, 4, 3, 2… — by just a nose over Cher, champions the concept of “shaking it off.”

It’s an excellent, albeit simplistically worded, life philosophy, and yet at this moment in my relationship with NBC’s reality singing competition, I just cahhhhhhn’t.

Instead, after Adam Levine’s shameful yet utterly predictable elimination of soulful stunner Toia Jones — because, apparently, he’s torn by the conundrum of “what you’ve heard, versus what you hope to hear in the future” — I’m channeling Wyclef feat. Mary J. Blige’s “911.”

Someone please call 911 (pick up the phone yo)/ Tell them I just been shot down/ And the bullet’s, in my heart/ And it’s piercin through my soul (I’m losin blood yo)/ Feel my body gettin’ cold

I know, I know, we go through three or four utterly absurd Voice injustices every season. Isn’t it time, though, for NBC to install a “Viewer’s Save” for the Battles, the Blinds, and the Knockouts? That way, the competition could extend the dream of a preternaturally talented performer such as Toia and also ensure a more satisfying, season-long viewing experience for those of us at home who are clearly more invested in truth, justice and soulfulness than People magazine’s soon-to-be-dethroned “Sexiest Man Alive.”

OK, end of rant. A lot of great singing, great decision-making and great advice — damn, Taylor is one insightful young artist — occurred over the course of tonight’s two-hour telecast. And I’m pretty sure not even Toia herself would want my recap to consist entirely of a screed against the man who did her wrong.

On that note, let’s get to ranking tonight’s Knockouts from least- to most-promising winner:

6. Team Adam: Damien (“How Do I Live” by LeAnn Rimes) defeats Toia Jones (“Crazy in Love” by Beyoncé) | Um, so you’ve got a grown woman working every corner of the stage, throwing every part of her body from her hair to her spleen into the music, and crushing it in every department from syncopation to intonation to holleration, and yet you choose the guy who offers up a verrrrrry sleeeepy Trisha Yearwood cover that tells the world his personal best will probably get him no higher than 10th or 11th place? Oh, Adam, it’s time to take a season off, dude.

5. Team Blake: Jessie Pitts (“Your Song” by Elton John) defeats Tanner Linford (“Calling All Angels” by Train) | In the battle of Knockoff Ellie Goulding vs. Fifth Place at the High School Talent Show Who Needs His Parents to Tell Him to Start Focusing on His Studies, the winner was… whichever more potent Team Blake members get to steamroll Jessie in the Live Playoffs. [Insert Sad Trombone here.]

4. Team Blake: James David Carter (“You’ve Got a Friend” by James Taylor) defeats Griffin (“As Long as You Love Me” by Justin Bieber) | I didn’t hear anything particularly wrong with James’ plaintive, twangy James Taylor cover, but when the best adjective your performance can conjure up is “nice,” you’re going to have to dig a little deeper in the coming weeks. Lucky for James, his rival Griffin’s tinny-sounding twist on Justin Bieber didn’t give him the momentum to sneak through the crack left in the Knockout Rounds door.

3. Team Gwen: Bryana Salaz (“Heart Attack” by Demi Lovato) defeats Sugar Jones (“Love on Top” by Beyoncé) — Sugar stolen by Pharrell | Going in, this matchup seemed about as exciting as a bag of raw almonds to a trick-or-treating second-grader. But to my surprise, both women showcased terrific technique and plenty of soul. too. Pharrell got the better end of the bargain by stealing Sugar — who scrambled up Beyoncé’s octave-scaling mountain without breaking a sweat, and trumped her rival by working the stage with gusto. Bryana, though, who befitted greatly from Taylor’s advice not to start and end the performance cranked up to 10, still comes off a little like the not-quite-ready-for-primetime belty-divas of Team Xtinas Past, but that aside, I can’t say she hit a single bad note on Demi Lovatos’s whiny anthem. Can either of these women actually win? Probably not. But with the right song selection — and an increased focus on originality — one or both could survive past Thanksgiving.

2. Team Pharrell: Luke Wade (“Rich Girl” by Hall & Oates) defeats Taylor Phelan (“Rather Be” by Clean Bandit) — Taylor stolen by Adam | Clearly, all three of Pharrell’s rival coaches were salivating over the prospect of snapping up one of his two strongest team members — why make them go head-to-head? — but to my ears, Luke was the unexpectedly easy winner. I could’ve gotten lost in his chipotle-smoked tone and intrinsic groove for a full hour — even if Pharrell had a point that perhaps a 25 percent reduction in vocal acrobatics would’ve made him even better. Taylor, meanwhile, exposed some weaknesses in breath support and pitch control as he worked the stage during “Rather Be,” but his Blind Audition remains one of the high points of Season 7, so I’m not giving up on him yet (even if his choosing Adam over Gwen and Blake leaves him at the capricious mercy of He Who Must Stop Wearing Bowling Shirts).

1. Team Pharrell: DaNica Shirey (“Saving All My Love For You” by Whitney Houston) defeats Katriz Trinidad (“Superwoman” by Alicia Keys) | To paraphrase the great philosopher Sade, DaNica’s a smooooooth operatoooor — a smooooooth op-ahh-ray-tahhhh. I mean, the way she wrapped her silky voice around Whitney Houston’s classic ’80s ballad about a smitten mistress gave me the same kind of feeling as climbing into luxury bedding at a high-end hotel. Yes, Pharrell will need to prove DaNica’s an equally natural fit for modern radio — just no Emeli Sande, please — but that glory not on “old fantasy-yyyyy” was 50 shades of great. I still figured Pharrell would choose note-perfect but emotionally globulus Katriz — because youth trumps almost everything in the music biz these days — but instead, he made like a Disney princess ballad and let the 15-year-old belter go. I mean, in the spirit of total honesty, until the kid realizes she’s more suited — lyrically — to Britney’s “I’m Not a Girl, Not Yet a Woman” than she is to Alicia Keys’ “Superwoman” — then perhaps the crushing setback of elimination – and the emotional aftershocks — will prove the most important building block to date of her fledgling music career.

On that note, it’s your turn. What did you think of Monday’s Knockout Rounds? Take our poll below, then sound off in the comments!