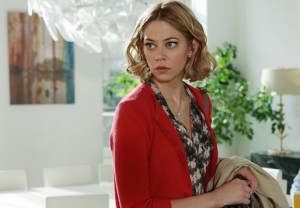 ABC’s Manhattan Love Story is not getting a happy ending.

The romantic comedy — which starred Analeigh Tipton and Jake McDorman as a new couple in the Big Apple — has been cancelled, making it the first official victim of the fall TV season.

The internal monologue-heavy rom-com premiered on Oct. 1 to 4.7 million total viewers and a 1.5 rating, and by its fourth outing had dropped to 2.7 mil/0.7. Even more damming, the show was only seeing a 15 percent boost from Live+7 DVR playback — the lowest return of any scripted series this fall.

Next Tuesday, a Halloween special fills ABC’s 8 o’clock hour. Then on Nov. 4, at least, Love Story’s spot will be filled by a second helping of Selfie (which has been averaging 4.1 million viewers and a 1.1 rating in Live+SD, and DVR boosts of 36 percent).

Are you bummed to see Manhattan Love Story reach an early conclusion, or did you predict it would end this way? Drop a comment with your reaction(s) below.