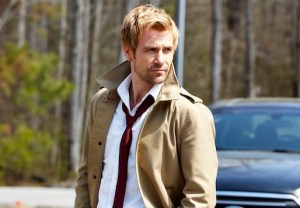 John Constantine‘s business cards read “Exorcist, Demonologist and Master of the Dark Arts” — and all three of those vocations get a workout in NBC’s new drama based on the popular DC Comics character.

After decades in the Hellblazer comics and one ill-fated run at the big screen, Constantine makes his TV debut Friday (10/9c). Welsh actor Matt Ryan (Criminal Minds: Suspect Behavior, The Tudors) plays the trenchcoated demon whisperer, a tortured con man who’d prefer to abandon his occult work but feels compelled to help those who need him most.

At the Television Critics Association summer press tour, Ryan — along with co-star Harold Perrineau (Lost) and executive producers Daniel Cerone (Dexter) and David S. Goyer (The Dark Knight) — offered up some devilish details about what viewers can expect from the new Friday-night frightfest. Grab some holy water (just to be on the safe side), and read on for the scary scoop.

OLD HABITS | In a sense, Goyer has been working on this project since he was a kid; he even had a fan letter published in Swamp Thing, the comic book in which the Constantine character was introduced. “The thing that I always loved about Constantine is, he was a smartass,” Goyer said. “He was just a working-class bloke. He had a wicked sense of humor.” Also: “I felt like it was someone that would translate into television without us having to change the core DNA of the character.”

ANGEL ON YOUR SHOULDER | Perrineau plays Manny, an angel who seems to be on Constantine’s side. “I say he’s an always an angel of questionable intent,” the actor said. Manny’s wings and clothing are more dull gray than the gleaming white commonly associated with heavenly hosts, and the EPs make it clear that that’s on purpose. “What we’re trying to do on this show is: Everybody has an agenda,” Cerone said. “He’s an Old Testament angel,” Goyer added ominously. 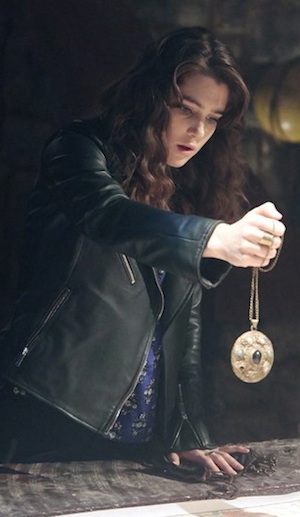 LUCY COME, LUCY GO | Don’t get too attached to Lucy Griffiths (True Blood), who appears in the start of the series as Liv, a young woman able to witness supernatural events: The actress exited Constantine so that the show could introduce Zed, a female character from the original comic. (She shows up in Episode 2.)  Zed is a psychic with a dark past who can call “spiritual grifter” Constantine on his nonsense, Cerone said. As previously announced, Zed will be played by Telemundo star Angelica Celaya.

SEE YA WHEN I SEE YA | Another Lostie, Jeremy Davies, also appears in the premiere as an old acquaintance of Constantine’s who illuminates exactly why he’s so tormented. Though Davies is not a series regular, “We hope to see him again” in a recurring capacity, Cerone said.

LENDING A HAND | DC Entertainment is highly involved behind the scenes at the show, but Cerone and Goyer emphatically state that the comic empire’s creative arm is a welcome presence. “The nice thing about them is, they’re very empowering,” Cerone says. “They’re not someone who’s saying, ‘No, no, no, you can’t do that.'” In fact, he adds, the DC folks are the reason we’ll see several comic-related Easter Eggs in the premiere and beyond.