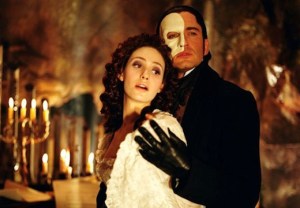 ABC alone can make his song take flight, and help Marc Cherry make the music of the night…

Now that we have your attention, Broadway fans, this just in: ABC has ordered a pilot script for the Desperate Housewives mastermind’s modern reimagining of Gaston Leroux’s gothic novel The Phantom of the Opera, one that will be set “in the sexy and cutthroat world of the modern-day music business.”

The potential series will not — we repeat not — be a musical, but the one-hour scripted drama will contain musical elements (a la the network’s country-music sudser Nashville), according to ABC reps.

The Phantom of the Opera pilot script will be written by Alan Zachary and Michael Weiner (Broadway’s First Date), with Cherry and partner Sabrina Wind serving as Executive Producers on the project.

Earlier this month, Cherry scored a pilot script deal for Cheerleader Death Squad at The CW.

Does a Phantom of the Opera TV project strike your fancy? Any immediate ideas for who you’d cast as the leads? (Hello, Zachary Levi and Megan Hilty!) Sound off in the comments!