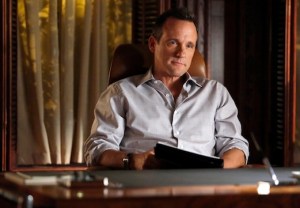 Jane Austen probably isn’t rolling in her grave, but she might be cursing out an angel or two if they forgot to set the celestial DVR for How to Get Away With Murder.

Who can blame her, really? This week, the original queen of the romantic comedy unexpectedly finds herself in the crosshairs of ABC’s vicious, delicious legal thriller — a bubbling cauldron of adultery, illegal legal strategy, workplace hanky-panky, skipped bail and a fair bit more than the recommended daily allowance of vodka on the rocks. (Pro tip: Two wedges of lemon in your cocktail allows you to enter it into your Weight Watchers “points” journal as a single serving of fruit.)

Over the course of the hour, we learn that one of our two central murder victims, Lila Stangard, used to refer to Sam Keating, her married lover (and coincidentally, our second murder victim), as “Mr. Darcy,” Pride and Prejudice‘s crushable leading man. Hrmmm… I don’t recall any scene in Ms. Austen’s novel where the haughty gentleman in question bequeaths a penis pic to Elizabeth Bennet. But as accused killer Rebecca points out, Lila was more spoiled sorority girl than intellectual trailblazer. “She thought it made her sound smart,” Rebecca notes of the “Darcy” moniker, “not like every other dumb girl obsessed with Jane Austen.”

That’s far from our only revelation, though. We get a closer look at Laurel’s love life (and a possible hint about her upbringing), a nasty frost spreading among Annalise, Bonnie and Sam, and Rebecca’s discovery about the Keatings that has her fleeing the City of Brotherly Love. Oh, and did I mention the massive shift in power dynamic between Annalise and wide-eyed Wes? 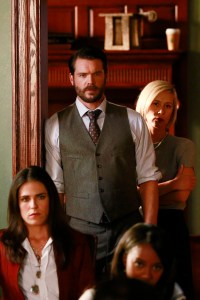 CASE OF THE WEEK | Annalise and her “Gang of Five” defend a cop’s son who put “hot lead in daddy’s head” in order to defend his battered mother. The good professor explains that this kind of emotional case hinges on juror selection, but when the carefully screened jury begins to lean toward the prosecution — despite Connor seducing one lumberjack member via sex-app and exposing his pro-police leanings — Laurel takes matters into her own hands. Her decision to leave in the courthouse hallway a document about “jury nullification” (aka the right to vote with one’s heart, not based on the evidence) — which could get Annalise disbarred if it leads back to her — leads to a mistrial, and thanks to public outcry over the poor kid’s plight, the case gets kicked back to juvenile court. It’s a win, of sorts, for the defense (even if it’s hardly HTGAWM‘s most interesting legal conundrum.)

With the week’s focus on Laurel’s part in the ongoing cases, we see more development in her illicit romance with Frank. He’s the one who warns her — and catches her — with regard to the jury nullification scheme (shouldn’t he have warned her to wear gloves when printing out copies?). But by episode’s end, their sniping session ends in a passionate kiss that Laurel breaks off, then picks up back at the Legal Aid office — and then some! — with boyfriend Kan. (I hope she at least had a mint in between sexytimes!) It’s clear from Laurel’s passion for the case that perhaps there’s some sort of domestic violence in her own past — through Asher’s tears after getting the win are, to be honest, more shocking. And while Laurel never gets the credit she wants from Annalise, she does openly challenge her Prof. in the classroom — revealing a backbone that might be stronger than those possessed by Michaela, Connor and Wes. Is the quiet, insecure one perhaps the baddest of the bunch? Girlfriend certainly seems to know how to fly under the radar when needed, but also the appropriate time for using her claws.

SAM’S MURDER | We get another flash-forward to the night of Sam’s murder, with our gang of four out in the woods and Laurel ignoring calls from Frank. Michaela, still freaking out over her lost engagement ring, pulls it together long enough to demand Laurel answer the phone (it’s better for an alibi) and to screech that Laurel had better not share their group misdeeds with Annalise’s bearded, hunky right hand. Ultimately, though, Laurel pays Michaela no mind — why should she? — and after agreeing to return the immunity trophy (aka murder weapon) to Asher, goes to Frank’s, asks him if he meant when he said he’d do anything for her, and then finally begins what could turn out to be a confession — or at least part of one: “I need your help.” But help doing what, exactly? And will it require Frank to take his shirt off (the way he is in Laurel’s #unrealistic cell phone pic)? And can Frank’s allegiance to Laurel — built over a six-week period — possibly trump his relationship to Annalise? If Hirsute McVesterson is on #TeamAnnalise, is it possible Professor Keating is the one who’s attempting to get away with murder, and using her eager charges as pawns? A longshot, but one I’m not ruling out. 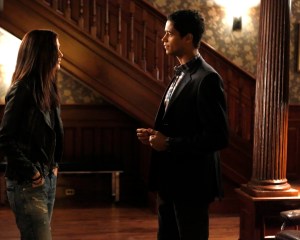 LILA’S MURDER | We resume last week’s “Why is your penis doing on a dead girl’s phone?” confrontation already in progress. Sam tries shrugging off his affair with Lila as a mere physical thing, but Annalise isn’t buying what he’s put in his “I was thinking with my winkle” coupon book. She accuses him of liking his mistresses to be “weak, broken, messes that you just clean up” — a string of words that she (shockingly) uses to describe her own self when she (apparently) came between Sam and his first wife. Sam’s reaction to Annalise’s increasingly noisy screed — pushing her down on the bed, covering her mouth — is the kind of creepy, knee-jerk violence that flies in the face of his “I’d never hurt her!” protests. But if Sam’s not guilty of Lila’s murder, who is?

My money is on Bonnie, who lurks at the border of Annalise’s home office and eavesdrops on the yelling. I don’t blame her for that indiscretion — I mean, this stuff is juicy! — but it’s the wide-eyed, trembly churchmouse look on her face while her ears fill up with gossip that icks me out a little. (Kind of the same “Oh, don’t mind my milquetoast blonde self” response she had when Sam caught her digging around for snacks last week. I still think she was up to no good — mainly because I don’t believe she really snacks between meals.)

Later, though, Annalise finds some of Bonnie’s crumbs where they don’t belong. Indeed, Nate breaks it off with Annalise after accusing her of telling his boss about his affair with her (and his investigation into Sam’s whereabouts on the night of the murder). (Side question: Did Annalise drive drunk to meet Nate, or was that alleyway near her home?) Annalise, though, instantly guesses that it was Bonnie who fed the info to police brass, and when she thanks her underling for “protecting my husband,” the “and no thanks at all for selling me out, bitch” is so clearly and implicitly implied it might as well be written on the wall behind Annalise in Bonnie’s tears. Why, though, doesn’t Annalise fire Bonnie on the spot?

Despite Nate unraveling Sam’s alibi on the night of Lila’s death, you can tell she kinda sorta believes her hubby’s not the killer — which doesn’t stop her from using his shattered alibi for her own gains: Yep, Annalise is expecting Sam to do a psych evaluation of Rebecca, or rather, use a psych evaluation to find out how much Rebecca knows about the identity of the naked guy on Lila’s phone. That’s where we learn that not only is Rebecca super smart and fairly paranoid, but also hear about the Mr. Darcy nickname and Rebecca’s suspicion that the older lover might’ve killed Lila in a jealous rage after she broke things off. At no point, though, does Rebecca connect the therapist across from her with the man in Lila’s penis pics — not ’til she heads to the bathroom.

There, she makes the curious observation that the purple and gold pattern in the Keating’s loo is the same exact backdrop for the infamous penis pic. She makes her exit, goes home and packs her stuff, and skips bail. “Did you know they were in on it together?” she asks Wes over the phone, aghast, and then spills her discovery. Wes, who continues to exhibit a blatant disregard for Annalise’s privacy, busts into her home office, marches into her master bath and starts soaking up the decor. His boss emerges in her night glamour with a “student, please!” look on her face.

“You lied to me… the wallpaper,” he stammers. “The picture on Lila’s phone, it was taken here. Your husband’s Mr. Darcy.”

No, it’s not quite the “last nine words” that dropped 10 million jaws across America, but as cliffhangers go, it’s not a bad one: Annalise’s face, for the first time in HTGAWM history, betrays a deep, unsettled fear. The other shoe has dropped at least, and now, she’ll be lucky to have seconds, let alone minutes, to spin a plausible yarn/mutually beneficial strategy to keep Sam’s cellphone indiscretions out of law enforcement’s hands. Do we think Wes will choose Rebecca’s well-being over Annalise’s? Or can Annalise sweet-talk her way back into Wes’ good, naive graces? I’m voting the latter.

QUOTE OF THE WEEK (After Connor’s “8 Is Great” dating app screen name is revealed by a judge)
Asher: “What’s your screen name mean?”
Connor: “I can show you.”
Asher: [horrified] “Oh, dude!”

On that note, I turn it over to you. What did you think of Episode 5 of How to Get Away With Murder? Sound off below!