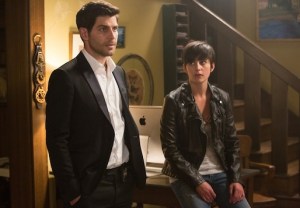 Grimm‘s Nick begins Season 4 much the way he ended Season 3: powerless, clueless and with a seriously cheesed-off girlfriend.

Oh, and did we mention the dead body ruining the hardwood floor in his foyer?

“The ground has been pulled out from underneath his feet,” star David Giuntoli says, referring to the way Adalind stripped his character of his evil-fighting abilities in the previous season’s finale. “It’s all about identity. Who am I now? What am I? How has this changed my life?”

Complicating matters: the fact that his houseguest/fellow Grimm/walking liability Trubel quickly becomes the subject of a federal investigation led by a very suspicious FBI agent (played by Orange Is the New Black‘s Elizabeth Rodriguez).

Read on for Giuntoli’s take on how Det. Burkhardt will deal with this season’s ordeals.

TVLINE | How would you characterize how Nick’s feeling at the beginning of the season?
At first glance, [what happens to Nick] is good for my relationship. I don’t have to kill monsters all the time anymore. But really, the world out there, I still know about it. Juliette still knows about it. They still know about me, they just don’t know I’m not a Grimm. So it doesn’t change too much.

TVLINE | There’s so much going on at the top of the episode, it takes Nick a while to really process what’s happened. When he really thinks about it, do you think Nick will be able to live like a normal guy, knowing what he knows?
No! No, I don’t think so. There’s just too much, too many friends involved. There’s too much going on out there that I can’t just ignore. 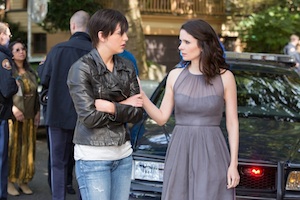 TVLINE | It seems like Juliette takes the opposite view.
I think Juliette probably also begins to understand that I’ve gotta get out there and try to do what I can for the world. I don’t think she’s gonna be cool with me just hanging out and watching Homeland with her on the couch. We are not gonna have that life.

TVLINE | The show hasn’t revisited their interrupted proposal from last season.
Yeah, I just propose and get denied, or the whole mission gets aborted. That’s just what we do in Grimm-land. There’s never a real, completed proposal. I don’t know why. [Laughs] We’re just living in sin.

TVLINE | Although given everything that’s happened in their past few hours — Nick slept with Adalind thinking she was Juliette, someone was decapitated in their house, Nick lost his powers — Nick and Juliette seem relatively OK.
She’s a tough cookie. Her hide has been toughened through various, horrible ordeals. Our homeowner’s insurance — you can only imagine what we pay monthly.

TVLINE | Are they going to move?
This is my house, this is my country. I will not move. I shall not move. I’ll tell you what we do move: We move the trailer. We hide the trailer, in one of the first episodes, into an unincorporated part of Portland. No one knows where it is. You can’t even get there by road. We finally smarten up and move it out there. But no, Nick and Juliette, we’re still fine in our little house. Our neighbors hate us. 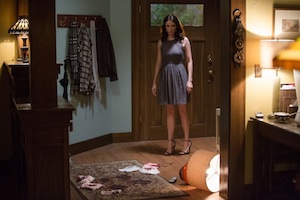 TVLINE | When Elizabeth Rodriguez’s Agent Chavez shows up, is Nick worried that Trubel’s story isn’t going to hold up?
Yeah, she’s interested in Trubel, as she should be. Why is this girl able to decapitate people? Where did she come from? Why is she living with us? Wu also has these questions, rightfully so… So no, I don’t like the fact that people are on to me in that way.

TVLINE | In the past, you’ve said you don’t want Wu to find out about the Wesen world.
I don’t think I’m gonna get my wish. [Laughs] I can’t really say what happens. I will say that [the show isn’t] just going to let his thing die… It becomes an issue. I think they’re doing a wonderful job, the writers, of letting this conflict burn slowly and watching Wu, our real last series regular who represents a normal human being who we’re keeping a secret from, they do a good job of watching him mentally struggle.

TVLINE | I keep thinking about how cruel it is to keep him in the dark. He was institutionalized for thinking that the aswang was all in his head!
Oh, you don’t know the half of it. It gets worse.