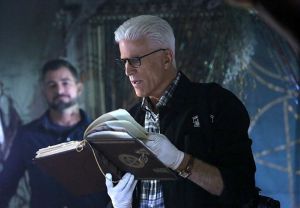 TVLine has learned exclusively that CBS has trimmed the venerable procedural’s Season 15 episode order from 22 to 18.

I’m told the decision was more about inventory than ratings. In addition to spin-off CSI: Cyber, which is slated to assume CSI‘s Sunday-at-10 perch later this season, CBS also has Vince Gilligan’s Battle Creek and a seventh season of The Mentalist waiting in the wings.

CSI’s move to Sundays at 10/9c has produced decent results: Although the show is down double-digits from its Season 14 average (when it aired Wednesdays at 10), it’s maintaining the time period’s year-ago average in viewers and adults 18-49.

This marks the first time in CSI‘s 15 year history that it will produce less than a full-season’s worth of episodes (save for the 2007-08 season, when the writers’ strike shortened the order to 17).