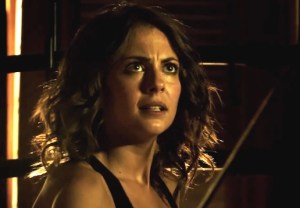 The women of Arrow were in a punchy mood this Wednesday, as we saw the lengths to which Malcolm went “temper” his daughter and Laurel got a bit overzealous in doing right by dead Sara’s leather jacket.

As Oliver and Roy (and Diggle, there on A.R.G.U.S.-related business) ventured to the South American island of Corto Maltese to track down Thea aka “Mia,” in flashback we witnessed how that season-ending father/daughter limo conversation went down, with Thea anxious to never “feel this pain again… to hurt or be hurt ever again.”

To that end, Malcolm invites Thea to choose any destination, at which he begins to toughen her up — first, with a bit of scalding wax and the mantra “Pain is inevitable, suffering is optional.” But later, Malcolm realizes that he must treat Thea as a student and not as kin, so he begins beating the tar out of her. When Thea shows she’s got some fight in her, he declares: “Now we can begin.”

In the here and now, Oliver and Roy take turns catching up with Thea, who insists she is “never” returning to Starling City. (Roy, bless him, takes the news pretty well, and dare I say even stung his ex a bit with his “acceptance” of their break-up, as much as his secrets had a hand in it.)

But Oliver believes it’s time for Thea to know the truth behind the secrets he has been keeping, and in a final heart-to-heart, he lays out a couple of them — the headline being that Robert Queen killed himself after reaching a lifeboat with Oliver. And with that seed planted, Oliver drives a point home like a freshly sharpened arrow: “Mom and Dad made sacrifices so that we could live, but if we’re not together, we’re not really alive” (or poignant words to that effect).

And as that seeps in, Thea tells Malcolm that she wants to go home — and then “wins” a duel with Dad to earn his permission. But upon meeting up with Oliver & Co. at the airport, Thea gets a passerby’s hot coffee spilled on her, yet she doesn’t even flinch. Yes, Roy, something other than her hair is different about Thea.

Elsewhere in the hour, Laurel crosses 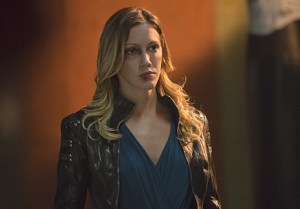 paths with boxer/gym owner Ted Grant, whose trainee was involved in a break-in. Upon meeting Ms. Lance, Ted senses she has some rage within her to “work off.” So he, unlike, Roy, gets points for perception. Because later, Laurel “suits up” in black this and that to take a bat to the abusive boyfriend of a girl she met in AA — only to have the galoot strike back, landing her in the hospital and on the receiving end of a scolding from Quentin. “Promise me you’ll never do anything like this again,” he says, warding her off of following Sara’s path. But as Laurel subsequently tells Oliver, Sara’s jacket makes her “want to help people,” and that Sara feels alive again when she does so. When Oliver refuses to train her to be something more/something else, Laurel takes Ted Grant up on his offer.

And last but not least, Felicity settled into her new job working for Ray Palmer at QC, where she now has her own assistant to fetch coffee and what not. Which proved helpful, seeing as her first day is riddled with 911s from both Diggle and Laurel (“I need you to help me find someone by Googling his phone or something”). Felicity is tasked with (and ably pulls off) salvaging files from a server found at the blown-up applied sciences division, and after she takes off to visit Barry Allen in Central City, Ray gets a mischievous look while scanning the schematics for assorted “advanced weapons.”

Oh, and at the very, very end, Nyssa al-Ghul crashes the Arrowcave, looking for her lovah Sara!

* Why do I suddenly have a very bad feeling about the Diggle/Lyla relationship? Given the bug put in his ear by A.R.G.U.S.-distrusting Shaw, and Lyla noting how they all do whatever Waller says, this can’t end well.

* Nice callback to Armitage, the arms dealer from Season 2, Episode 12.

* Was Ray trolling the “Sara is alive!” theorists by referring to Felicity’s work as a “digital Lazarus“?

* “Are we favor friends now? Are we friends?” Good question!

What did you think of “Corto Maltese”?