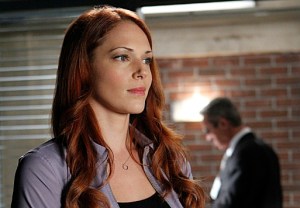 Righetti will play Madeline, younger sister of Katie (played by The Walking Dead‘s Sarah Wayne Callies) and mom of a diabetic child who needs insulin. From the character breakdown, it seems like Madeline will do whatever is necessary to take care of her family.

Josh Holloway (Lost) will lead the project, which is set in Los Angeles after aliens occupy the city.

The part is Righetti’s first regular role since leaving The Mentalist earlier this year. Her other credits include Reunion and The O.C., and she appeared in last season’s Chicago Fire/Chicago P.D. crossover event.