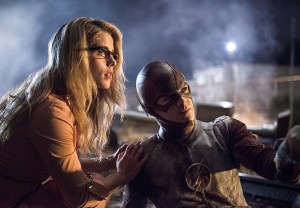 Tech expert Felicity Smoak will leave her Arrow desk behind — temporarily — to get in on the action at The Flash, and she’s in the thick of the danger in the following photos from the battle with Wentworth Miller’s villainous Lenard Snart, aka Captain Cold.

While it appears that Felicity helps out the S.T.A.R. Labs crew with computer wizardy, she also picks up some machinery during a confrontation between The Flash and the criminal mastermind. Will a near-death experience reignite the sparks that flew between Felicity and Barry on Arrow last season? And what will she think of his new abilities?

Check out the gallery, then hit the comments with your thoughts on Miller’s chilling foe.