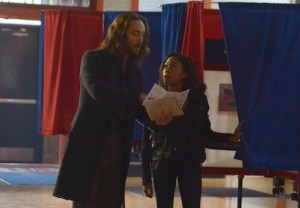 In this recently released series of photos from the Fox drama’s Nov. 3 episode, Crane gets his first taste of democracy-in-real-time when he and Abbie visit a polling place during the midterm elections.

“He gets to go to the polls,” executive producer Mark Goffman tells TVLine, elaborating on some earlier scoop. He adds that the scene is “a little commentary about Crane realizing just how few people vote, this right that we fought for so hard.”

If the sticker on Crane’s coat is any indication, he steps into a booth and pulls the lever — thanks (we’re guessing) to his ill-gotten passport from Hawley.

Elsewhere in the episode, the Witnesses race the clock to save Katrina, which may or may not have something to do with the corpse-alicious arm tormenting Abbie in one of the shots.

Click through the gallery below to see all of the photos, then hit the comments with your early thoughts on the episode.