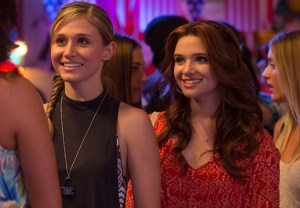 The Faking It team must have some pretty great karma.

Stars Rita Volk and Michael Willett recently stopped by TVLine to offer a look at what’s to come, beginning with the game-changing secret that propelled us into Season 2.

Volk admits it’s “inevitable” that Liam and Amy’s sex secret will come out, and the best way to sum up the aftermath is that everything just gets “really sh—ty.” 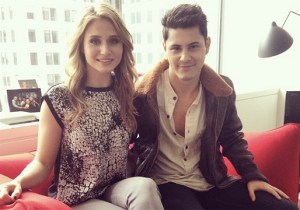 “Amy can’t keep it in for that long, and Liam — even though he’s known as a player and a liar and a cheat — is actually a pretty good guy,” she explains. “So it’s bound to come out, and it’s not going to be pretty. … Everyone gets screwed over and hurt.”

But first: New love, or at least lust, interests for both Amy and Shane! Amy will have a follow-up encounter with the cute cater-girl from Liam’s family’s party — there’s “no shrimp involved this time,” Volk says — while Shane will find a kindred spirit in Duke (Skyler Maxon), a new character viewers will meet Tuesday.

“I really like [the idea of] Shane and Duke as a couple,” Willett adds. “But we’ll have to see where that goes. I don’t even know the final outcome; the way it all turns out, you don’t quite know what happens.”

Faking It fans, what do you hope to see in the rest of Season 2? Browse photos below, then drop a comment with your hopes.