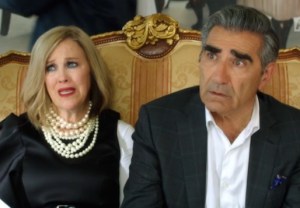 Premiering with the POP rebranding in 2015, the half-hour comedy Schitt’s Creek follows filthy rich Johnny Rose (played by Levy), his soap opera diva wife Moira (O’Hara) and their two kids (played by Annie Murphy and Levy’s real-life son Daniel) as they suddenly find themselves broke and forced to relocate to the sad, titular town, which Johnny years ago bought for his son as a gag. Chris Elliott (How I Met Your Mother) plays the town’s mayor, Roland Schitt.

Eugene and Daniel Levy cocreated the series. Watch the trailer below, and share your expectations.