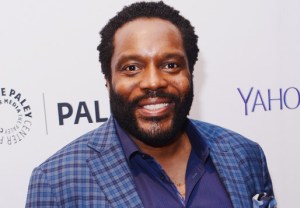 Law & Order: SVU is tackling the issue of domestic violence in professional sports with a little help from a Walking Dead favorite.

Chad Coleman — better known to TWD fans as Tyreese Williams — will guest-star on the NBC procedural’s Nov. 19 episode, titled “Spousal Privilege,” playing a football player-turned-reporter who is caught abusing his ex-girlfriend on camera. The twist? Both he and his victim want to “keep the charges under the radar.”

“Domestic violence, with a push from Mariska Hargitay’s NO MORE campaign, has recently sparked a long-needed national dialogue,” showrunner Warren Leight said in a statement. “‘Spousal Privilege’ explores the personal and legal complexities of this intractable problem. We are thrilled that Chad and Meagan are joining us to take on this challenging episode.”