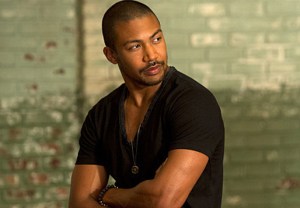 With the Mikaelson family back in New Orleans — and on the warpath, naturally — tensions have become hotter than ever on The Originals. Marcel’s bed on the other hand? That sucker’s staying cold.

“[Cami and Marcel] are both doing the responsible thing, given the state of New Orleans right now,” Charles Michael Davis tells TVLine of the twosome who appeared hot and heavy just three weeks ago. “Cami represents the human faction and Marcel is in charge of the vampires. It’s probably not the best time to start a relationship. We both just need a little time.”

Below, Davis discusses Marcel’s future in the Big Easy, including which of his new trainees will challenge him the most, and what we’ll learn about him via flashbacks.

TVLINE | Let’s talk about Gia a little bit. She seems like a little troublemaker.
He realizes she’s looking for something to fight for. He’s just like, “Bring me your tired, your poor, your huddled masses yearning to breathe free.” [Editor’s note: Marcel is a plagiarizer.] They’re all a little damaged, they all want a better life and they’re all searching for something — whether they’re conscious of that or not. Gia has her heart in the right place, but she still needs to get her legs under her. Marcel and Elijah will be mentoring her and explaining things to her.

TVLINE | So much new information is introduced through flashbacks. Will we learn anything else from young(er) Marcel this season?
We’re going to learn a lot more about Marcel, actually. I just got some later scripts, and all the writers have been talking about this one flashback episode for weeks. We’ll get to see Marcel become a leader and step up, which is all part of his bigger journey. He’s in another transition period right now, so we’re going to look back and see what he did earlier in his life when he was looking for something bigger than himself.

TVLINE | I mean, he’s practically family.
He is, but he’s like that best friend that comes over for dinner. Then when the parents get angry and things get heated, they’re just like, “Marcel, go home!” And he’s like, “OK, bye, see you guys tomorrow.”

TVLINE | That said, is Marcel still going to find himself tangled in their family drama?
That’s always his dilemma — being a part of the family, but not being a part of it. How does that define him? They’re all very damaged, and as we saw from last week’s flashback, they almost submit Marcel to some trauma. So is he going to get used to it and want to stick around, or is he going to set himself apart and have is own identity outside of it?

Your thoughts on The Originals‘ new season? Are you hoping for more Cami-Marcel romance in the future? Drop a comment with your take below.