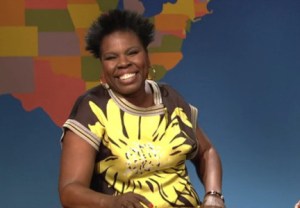 SNL scribe Leslie Jones — who brought the house down riffing on relationships during a “Weekend Update” segment last month — has been promoted to a full-fledged castmember, TVLine has confirmed.

Jones joined SNL‘s writing team last season, and made her first on-camera appearance via a controversial May “Weekend Update” segment about slavery.

Press PLAY below to watch her aforementioned relationship takedown from the season premiere.