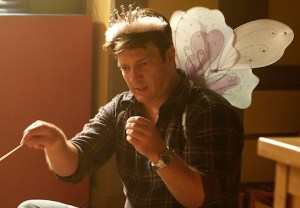 This week on ABC’s Castle, Rick got schooled by a classroom full of second-graders as he endeavored to suss out the eyewitness to an ice cream man’s murder. What lessons did he learn along the way?

THE CASE | An ice cream truck owner’s son, Anton, is found shot dead in the vehicle — and Ryan quickly realizes that someone had been hidden in a storage cabinet within at the time of the murder. A left-behind permission slip suggests that the witness was a student in second-grade teacher Mrs. Ruiz’s class, but initial probing leads no student to come forward. So, “being 90 percent kid” himself, Castle gets recruited to visit the class, with a “plan” to draw out the witness. His first idea, to have the kids write a story, provides a false lead. Afterward, a student named Emily indicates that she has something to confide… but during her princess tea party date with Castle, we learn that her secret is merely a frustration with classmate Jason.

When Castle’s advice to Emily gets Jason popped in the nose, Rick is shown the door — but not before someone slips in his pocket a tell-tale drawing of the ice cream truck. A bit of digging around reveals bratty Jason to be the artist, though he says it was not him inside the truck — it was his half-sister aka Anton’s teacher of graphic design. Long story, short: Anton, childhood friend Dmitri and an ex-cop were working together to help exploited Russian immigrants get back home, using fake passports. That bit of business unexpectedly led a Russian war criminal to cross Anton’s path, and kill anyone who might have seen his photo. Rick and Kate rush to the school to fish the pic out of Jason’s desk, just as the Big Bad arrives to deliver a couple of beat-downs. Castle literally fells the Russki, though, with a jarful of marbles. And for exhibiting patience with Castle, Mrs. Ruiz gets a medal from the NYPD!

All told, it was an interesting-enough case, though as with Kindergarten Cop, you can get distracted by how they must be careful to never actually put the kids in harm’s way (e.g. how not one rugrat was roaming around during the final, presumably after-school scuffle). Also, I’m curious: Are Smart Boards not prevalent in NYC public schools yet? Here in Northern New Jersey, from first-grade up, you can’t swing a dead cat without hitting several.

THE CASKETT | With Rick in the classroom and Kate off chasing leads/more dead bodies with RySpo, the lovebirds were separated for much of the hour, though there were cute moments involving Rick’s favorite ice cream flavor, wee Emily’s jealousy of Mr. Castle’s girlfriend, and a fun bit where “jerkface” Rick and “frog breath” Jason called a “truce.” A C-story about Alexis’ smothering mothering of her father was just as weird and random as her antics, serving only to denote that Rick’s “vanishing” act had his daughter worried about losing him again. But hey, at least it again proved that someone remembers Alexis’ own kidnapping!

What did you think of this week’s Castle?