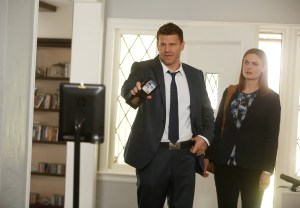 Bones is commemorating its upcoming 200th episode the old fashioned way — with an Alfred Hitchcock homage!

TVLine has learned exclusively that the milestone outing — directed by series star David Boreanaz — will find Booth and Brennan starring in their very own ’50s thriller inspired by the Master of Suspense.

“It’s not an alternate reality, it’s as if Booth and Brennan existed in this world — would they still get together?” explains exec producer Stephen Nathan, who penned the episode. “Everyone is sort of playing their own characters.”

And “everyone” includes the show’s primary cast as well a number of recurring favorites (specific names are TBD as scheduling gets worked out).