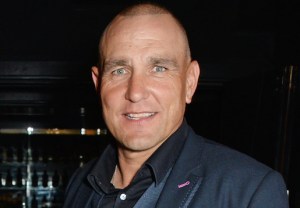 Professional soccer (or “football”) player-turned-actor Vinnie Jones next will get his kicks with a plum role on Arrow.

As first reported by our sister site Variety, the Brit will recur on the CW series as Danny “Brick” Brickwell, a ruthless gang leader.

But whereas in DC Comics lore, Brick’s nickname was born of his near-impervious hide, on Arrow is stems from his reputation for having sustained multiple gunshot wounds.

Jones’ previous TV credits include Elementary, The Musketeers and The Cape. His three-episode Arrow arc begins with Episode 10.