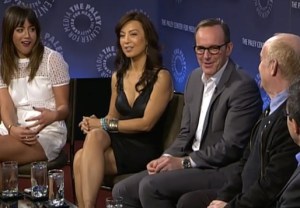 The Agents of S.H.I.E.L.D. held court on Sunday evening at the New York City Paley Center’s Paleyfest, in a panel discussion moderated by yours truly and embedded below.

Following an advanced screening of this Tuesday’s episode — in which Coulson makes an unspeakable decision that elicited gasps from the audience, and Adrianne Palicki erupted the crowd as Marvel’s batons-wielding badass Bobbi “Mockingbird” Morse — Clark Gregg sang the praises of the ABC series’ casting and its crafting of strong female characters. (As Marvel TV boss/exec producer Jeph Loeb explained, “We cast up” to get the likes of Bill Paxton, Lucy Lawless and Kyle MacLachlan for key roles.)

We also touched on the latest theories regarding Skye’s origin (which, along with the fact that we don’t know her true name, is heavily revisited this week), and then dug in deep discussing the late-Season 1 reveal that Ward is HYDRA, coming out of the events of Captain America: Winter Soldier. As Loeb notes, there was “a whole bunch of dialogue” in S.H.I.E.L.D.’s very first episode that hinted at the twist. “We were telling you, he’s HYDRA…. Please fall in love with this guy, because he’s going to break your heart.”

Ming-Na Wen and Chloe Bennet at one point amusingly re-enact the table read where they first learned of Ward’s true agenda. (Bennet recalls crying, “But I kissed him!” while Wen’s recounting of May’s own involvement with Ward is… um, a bit more R-rated.) Loeb then shares the story of how Iain de Caestecker refused to believe his on-set BFF was playing a bad guy.

Then there was the none-too-small matter of the cast getting a super-secret sneak peek at Winter Soldier, the events of which seemingly cast a dark shadow on the TV series’ future. As Gregg wondered, “What are you gonna call the show now?”

Outside of what transpires in the next episode — including but far from limited to a long-awaited Fitz scene and a well-earned hug — specific spoilers were scarce. Bennet indicated to an audience member that we’ll see Skye engage in close-quarters combat, while when Wen noted, “I have not had any scenes with Brett [Dalton]” (who plays imprisoned Ward), Gregg jumped in to clarify, “…that we’ve seen [on screen] so far.” But that may be just as well. As Wen observed, May “would probably kill” her traitorous booty call!

Gregg hinted that coming off the recent episode “Heavy is the Head” — and given one theme in this week’s episode — “Crazy is the Head” might better tease Coulson’s Season 2A trajectory. (And with 18:00 left on the counter, you won’t want to miss the MCU actor’s thoughts on Coulson lying to “his hero” Steve Rogers about still being dead.)

When another attendee asked the cast which Marvel faves they’d like to visit S.H.I.E.L.D., Gregg immediately cited Guardians of the Galaxy‘s “Groot,” while Wen and Bennett went with human (if not he-man) options.

With 9:00 left, Wen and Gregg discuss the filming of last week’s grueling May-on-May showdown, as well as their ballroom dancing debut (including one unlikely practice venue and advice from Gregg’s Dirty Dancing wife, Jennifer Grey). And then in the final 30 seconds, I ask Loeb if TV’s S.H.I.E.L.D. needs to get anything specific done/established before Avengers: Age of Ultron film hits theaters on May 1, 2015. He played coy, but ultimately reminds: “It’s all connected.”

Want more scoop on Agents of SHIELD, or for any other show? Email insideline@tvline.com and your question may be answered via Matt’s Inside Line.