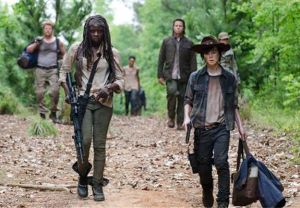 With the introduction of Seth Gilliam as Father Gabriel Stokes in this week’s episode of The Walking Dead, absolution seemed to be on a lot of our survivors’ minds. Unfortunately, one member of the group wound up in a predicament so dire, they might not live long enough to even make confession! Who was it? Read on and find out.

NEW BEGINNINGS | As “Strangers” began, Rick let Tara know that, in spite of her past affiliation with the Governor, they were cool, and she sealed their new understanding with a fist bump. Nearby, Tyreese assured Carol that those who know she killed Karen accept it and those that don’t yet, will. However, he drew the line at telling anyone about what happened with Lizzie and Mika. “I just need to forget it,” he insisted.

Later, Rick cornered Carol for a one-on-one in which he acknowledged, “I owe you everything.” In turn, she was pretty big about the whole being-banished thing. “You said I could survive,” she noted. “You were right.” Finally, he humbly asked if, now that she and the gang had been reunited, “Will you have us?” In response, she offered a slight smile and a nod.

DIVINE INTERVENTION | Making tracks again the next day, Bob was teasing/delighting Sasha with a game of “Find the Good in the Bad” when they all heard cries for help. Turned out, it was Gabriel, who, even after being rescued from some hungry walkers, maintained that “the word of God is the only protection I need.” (Tell that to Daryl’s crossbow, buddy.)

Skeptical from the start, Rick grew even more suspicious of the newcomer upon hearing that, since the zombpocalypse, he had dispatched a total of zero walkers (and, for that matter, zero people). “What have you done?” Rick demanded. “We’ve all done something.” But Gabriel remained a closed book, insisting that he confessed to the Lord, not strangers.

FOOD FOR THOUGHT (AND DINNER) | As soon as the group had taken refuge in Gabriel’s church — which even came equipped with a short bus in need of repair — Rick made arrangements to leave Judith with Tyreese (the world’s burliest, most huggable baby sitter) and go on a supply run with Michonne, Bob, Sasha, Glenn, Maggie, Tara and a very reluctant Gabriel. Before leaving, however, he gave Carl the most dire pep talk on record (“You are not safe” — ever!), prompting his son to reassure him that the group is not just strong, “we’re strong enough that we can still help people.” (Nice to see Carl’s stint as a budding sociopath in the rear view, isn’t it?)

Shortly thereafter, while heading for the county food bank, Bob urged Rick not to give up so much of his humanity that he won’t be able to fit back in in the real world. “This is a nightmare,” Bob offered, “and nightmares end.”

Meanwhile, off on their own, Daryl and Carol discovered a possible getaway car (should things go south at Gabriel’s church), and he encouraged her to let go of the past that she won’t discuss and start fresh. She wanted to, she said. But… well, that’s easier wanted than accomplished.

MONSTERS, STINK | At the county food bank, Rick, Michonne, Bob, Sasha and Gabriel found a bunch of walkers growing slimier by the minute in a waist-deep pool of rainwater. Apparently they were especially “fragrant,” too. “If Godzilla could puke,” Bob quipped, “this is what he’d smell like.” Nonetheless, the quintet made off with a great haul.

Wait, did I say “quintet”? I meant “quartet,” as Gabriel was no use whatsoever, allowing himself to be cornered by a walker (that we — but no one else — later learned was one of his parishioners) and cowering until his butt was again saved by Rick.

On the way back to Gabriel’s church, Rick asked Michonne if she missed her sword. Her beautiful reply? She missed Andrea. She missed Hershel. But she didn’t miss either the sword or the lonely pre-group existence that it represented to her.

BOOK OF REVELATIONS | Back at the church, Carl proved that he had taken his dad’s mistrust of Gabriel seriously by showing him knife marks on the structures’ windows: Somebody — human — had tried to get in. And, presumably denied entrance, that someone or someones had then carved “You’ll burn for this” into the wood. Off this twist, Rick didn’t cast out Gabriel, but he did issue the sternest of warnings, informing the preacher that this group is his family, and if anything the holy man did or does hurts his family, “I’ll kill you.”

While everyone was for once in a good mood, gorging on canned food and unblessed Communion wine, Abraham made a toast to the survivors and challenged them to be more than survivors — to be heroes by accompanying him as he delivered Eugene to D.C. “Save the world for that little one,” Abraham said to Rick, who was holding Judith at the time. And, when the baby gurgled, her dad cheerfully announced, “If she’s in, I’m in.”

After bonding some more with Maggie, Tara could no longer bear her guilty conscience, so she confessed that she had been part of the Governor’s attack on the prison — the attack during which he murdered Hershel. “I just didn’t want it to be hidden,” Tara said. And, in a particularly touching moment, Maggie embraced her and assured her, “You’re here with us now.”

OUT OF THE FRYING PAN… | While everyone was at the church, making merry, making confession or making threats, Carol doubled back to the getaway car. When Daryl found her, she couldn’t even say for sure why she had done it. (Thinking of leaving after all? Unable to accept everyone’s acceptance?) But whatever the reason, it was a good thing she did, because as they were standing there, the car with the big cross on it sped by. “They got Beth!” Daryl shouted. And off they went in hot pursuit.

Overwhelmed with emotion, Bob also ducked out of the party in the church. But no sooner had he begun to have himself a good cry than he was knocked out cold. Next thing we — or he — knew, he was tied up in front of a roaring campfire, and Gareth (uh-oh) was telling him that he and his buddies don’t want to do any of the horrible things that they do, they simply have to. It’s not personal. And, as he took a bite of barbecued meat, he added, “If it makes you feel any better, you taste much better than we thought you would.”

And then we saw it: Holy s—! Bob’s freakin’ foot was on the freakin’ fire! They were eating his calf!

OK, your turn. What did you think of the episode? Were you surprised that it was Gareth and not Morgan who had been tailing the survivors? Or do you think Morgan was out there, too, and (hopefully) will save what’s left of Bob? Hit the comments!