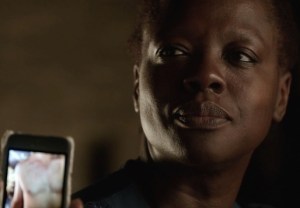 THE EPISODE | “Let’s Get to Scooping“

THE PERFORMANCE | Much has been said about the boldness and bravery of Davis’ performance in this week’s episode of How to Get Away With Murder. And indeed, in a TV landscape where characters go to bed, wake up, and even pull through surgeries, comas and traumatic accidents with their foundation, blush and eyeshadow in resplendent condition, there was a wonderful audacity in the way Davis stripped her character bare of jewelry, wig and makeup right there on camera. (That the Oscar-nominated actress recently found herself described as “less classically beautiful” than Kerry Washington and Halle Berry in a dumbfoundingly tone-deaf New York Times piece made her lack of vanity all the more impressive.)

The real thrill of the performance, however, went much deeper than surface-level trappings. As her powerful law professor Annalise Keating removed her glamorous armor, Davis allowed us to see deeply into the psyche of a woman who — through the first few episodes of ABC’s new Thursday-night smash — has been all but unknowable.

In the last few minutes of “Let’s Get to Scooping,” Annalise confirmed that her sexy husband Sam had (once again) cheated on her with one of his students — only in this case, the coed in question was murder victim Lila Stangard. Without a single word of dialogue, Davis made us understand the depth of the betrayal felt by Annalise — the hurt that Sam had strayed, the disgust in herself for having believed his lies, the exhaustion of being a part of their fractured union, the anxiety over having to decide how to proceed (especially since she happens to be the defense attorney for one of Lila’s accused killers). Wiping away her cosmetics with a moist towelette, and removing her sleek auburn locks to reveal her natural close-cropped curls, Annalise came face-to-face with her bare self, compartmentalized her heartbreak and reclaimed her power as an unsuspecting Sam returned home and strolled into their bedroom suite.

“Why is your penis on a dead girl’s phone?” Annalise asked flatly, holding up a screen showing her husband’s muscular, disembodied torso. It was breathtaking conclusion to an hour of gasp-inducing television — and a reminder that while Annalise may indeed be human, she’s a scarily formidable one. In other words, stealing a catchphrase from the great philosopher Beyoncé, Annalise — and the actress who plays her — woke up like this…flawless.

HONORABLE MENTION | This was not the ending to the Matt Williams storyline that Hawaii Five-0 viewers were expecting. Procedurals tend to wrap up arcs in tidy ways, but as this roller coaster took a nasty turn, Scott Caan made sure we rode it out with him. Danny had found his brother’s stash of cash, only to discover that it was well shy of what Reyes was demanding. And the clock’s ticking. Danny was loath to reach out to Ko, of all people, for a loan (only to get shot down). His heart sank further when Chin Ho made an ill-advised bargain with Malia’s brother to secure more cash. Through it all, Caan made sure we felt how on-edge Danny was. But that was nothing compared to when Reyes fulfilled his end of the deal… by producing a barrel with dead Matt inside. Beside himself, Danny, with McGarrett’s help, overpowered Reyes’ henchmen, then aimed a pistol at the cretin’s cranium — and pulled the trigger. Because of the pained, angry look in Caan’s eyes, we understood Danny’s actions, as dark as they were.

HONORABLE MENTION | Mindy Project creator/leading lady Mindy Kaling was a madcap delight in this week’s episode, which found Dr. Lahiri lying early, often and with zeal. Kaling was on from the first moments of the cold open, fake sobbing with abandon to get out of a speeding ticket and then smugly basking in some roadside afterglow. Her performance picked up speed as Mindy and her new boss (Getting On‘s excellent Niecy Nash) had an uncomfortable romantic entanglement — Kaling’s read on Mindy thinking she might be a lesbian was great — and reached its peak when Dr. L was forced to admit she’s attracted to dudes. Our favorite moment, however, was one of Kaling’s quieter ones: when the actress, without words, communicated exactly how much Mindy loves Danny just by the way she gazed at him during his ridiculous faux-drunken rant. Mindy Lahiri may be rom-com ridiculous at times, but Mindy Kaling and her on-screen alter ego were definitely made for each other  — or, as Sleepless in Seattle fan Dr. L might prefer to state it, “MFEO.”